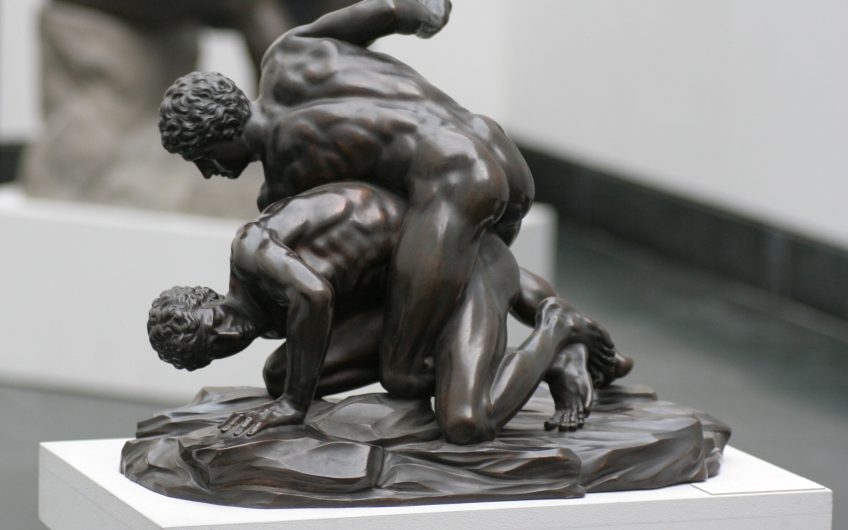 As Mary Beard's Shock of the Nude begins on BBC2, Harry Mount explains why Greek statues are naked

The Athenians were generally much more relaxed about nakedness than we are.

They would have been amazed by the Charlie Hebdo massacre in Paris in 2015, and the row over depicting religious figures, fully-clothed or otherwise. Zeus, Apollo and Poseidon were regularly sculpted in the nude.

Fifth century Athens was a strange, unprecedented combination of artistic freedom and rigid artistic rules. There were strict ratios governing the relationship between the height of columns, their width and how far apart they were. On those statues, the length of the torso was in precise proportion to the length of the line running at right angles to it, from nipple to nipple.

Before the Greeks, there had been naked depictions of Assyrians – you can see them in the British Museum. But these were humiliated, naked victims of war, flayed and beheaded by the victors.

Unlike the Assyrians, Persians and Egyptians before them, the Greeks made heroes of the naked form. Greeks thought the idealised human form, the uniform of righteousness and heroism, was the naked one. Greeks are often naked in battle scenes unlike their enemies – particularly the Persians, who thought the nude body was shameful.

Greeks didn’t actually fight naked in battle, nor did they stroll naked down the Athenian High Street. But they did take their clothes off for athletic events, in the wrestling school and gymnasium. The original Greek gym was far from its modern exercise-obsessed incarnation; it was also an intellectual hothouse, where philosophers, like Socrates, debated and taught the young.

The gymnasium got its name from "gymnos", Greek for naked – the ideal state for running about and throwing things in, they thought. One explanation is that, in the 720 BC Olympics, Orsippus of Megara’s loincloth fell off in the 200 metres – and the habit stuck.

When they wrestled, they covered themselves with oil and sprinkled themselves with sand to get a better grip. The earth arena - from “harena”, Latin for “sand”, the preferred surface in Roman amphitheatres - was sprinkled with water. A kind of naked mud-wrestling ensued, while restful flute music played in the background.

Nakedness in the sand had its pitfalls. Boys were told not to sit in the sand in the gym for fear old men would get too excited by the impression their genitals left in the sand.

It was in the perfect naked form – like that of Myron’s mid-5th century Discobolus, the disc thrower - that man was in perfect balance. It was said of the Discobolus that more mathematical knowledge of balance and stress was needed than on any previous statue.

The body was celebrated in all its forms. Ancient vases depicted the black bodies of the Ethiopians, who fought for the Trojans under their king, Memnon, held up as the Ethiopian Hector.

But the Greeks were a little more concerned about the naked female form. Venus – or Aphrodite, to give her her proper Greek name – was the only Greek woman sculpted naked; thus Venus de Milo’s half-naked look. Praxiteles’s fourth century BC Aphrodite of Cnidus – which now only survives in copies – showed her carefully placing her dress on a vase before going for a dip. It’s the earliest known sophisticated nude sculpture of a woman.

Parian marble was also used for the naked Venus de Medici, in the Uffizi. This Aphrodite is a terrible flirt: completely naked, she only half-hides her breasts and crotch, leaving a pretty racy view from all sides.

It’s hard not to see an intensely sexual element to some of the more sensuous sculptures of women: not least the Nereids from the 390 BC monument in Xanthos, in modern Antalya, Turkey. These sea nymphs, now in the British Museum, appear to be sprinting into a headlong gale, their thin gowns plastered against their chests by the wind and rain – the first wet T-shirt competition.

In earlier Greek sculptures of men, the sexual element was even more graphic. The earliest known representation of a mythical figure – on show in the British Museum – is a three-inch tall, mid-eight century BC statue of a naked Ajax.

Ajax, the strongest of the Greeks, is deeply depressed at losing Achilles’s armour to Odysseus, after wily Odysseus is characteristically more eloquent in staking his claim to it.

And so Ajax falls on his sword – a rather delicate operation since he also happens to have an enormous erection. On top of that, his whole body is shaped like an enormous erection, with his head moulded into the head of a penis. No wonder it was kept in the British Museum's Secretum - the name for Cupboard 55, where all rude objects were kept from 1865.

The Secretum wasn’t opened up until the 1960s. It’s only half a century ago that we caught up with the Greeks’ astonishingly avant-garde approach to naked beauty.

“Ithyphallic” (straight-phallus) figures like Ajax were common in Greece. To find one of the great Greek heroes of the Trojan War naked and excited at the moment of death shows how at ease the Greeks were with sex.

The convention on later classical Greek statues was to give them small, non-erect penises. This wasn’t to console male citizens, but to show the virtues of self-control among the mighty gods; even that celestial love-rat, Zeus, and the acme ("highest point") of male strength, Heracles. Only ludicrous figures lacking self-control had big penises; like the actors in Greek comedies, who had huge willies dangling from their tunics. In the gym, large penises were so unfashionable that the Greeks tethered them to their waist with a leather thong rather than let them swing around.

When it came to naked statues, the Romans imitated the Greek originals – that’s why so many original Greek bronzes, later melted down, are only known today thanks to Roman copies.

The Greek ideal of the naked body was celebrated during the Renaissance, too. Michelangelo based his naked Adam, on the Sistine Chapel ceiling, on the Belvedere Torso, a twisting, contorted fragment of a first century BC copy of a second century BC naked male. The torso so influenced Michelangelo that it was once known as “The School of Michelangelo”.

Before the Elgin Marbles came to Britain in the early 19th century, the Belvedere Torso was considered the ideal sculpture of the human form. That it had such influence was particularly striking, given the absence of a head. How brilliant, critics said - of the torso and of Michelangelo’s work - to portray emotion through stomach muscles alone.

That ideal of the perfect Greek body lives on today. From Bondi Beach to Venice Beach, people yearn to emulate the Greek six-pack look. Adonis, the Greek god of beauty, is revered now just as much as he was by Sappho, in one of her heterosexual phases, in a poem of around 600 BC.

You could hardly call the fifth century Greeks secular – the Gods were everywhere, in sculpted form, and in the popular subconscious. But this cheerful willingness to strip their gods naked showed they didn’t defer too crazily to them.