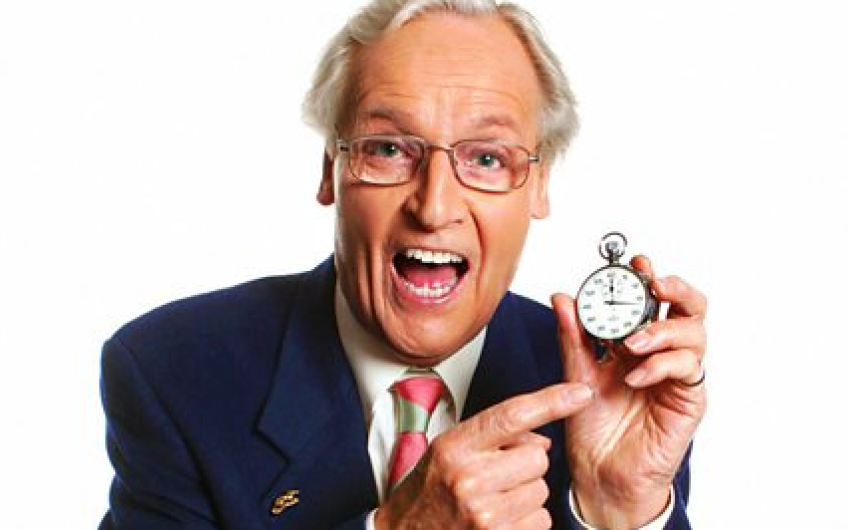 Oldie readers may never have tried speaking for one minute on a given subject without hesitating, repeating a word, or wandering off-piste.  But do try it - it’s harder than you think -- and not in private, please. Let’s suggest a subject:  laughter, perhaps. Or Being an Oldie. Or Paying Bills. Then imagine speaking into a microphone in front of rows of eager faces, and the results being broadcast ‘all over the world!’ as the chairman Nicholas Parsons constantly reminds us at the start of Just A Minute.

Parsons recently turned 94.  He has been chairing the game since its original pilot 50 years ago.  Yet he manages to stay alert and sharp and somehow to hear every word and buzz, responding to each twist of the wayward panellists’ surreally inventive brains, even if Ross Noble or Paul Merton veers off to another planet. Parsons’s willingness to be guyed by the panel is one key to the show’s success – as I discovered when I interviewed him for the December Oldie.

In 25 years of writing on radio, watching many broadcasts as they happen, I’ve never attended a recording of JAM, as participants call it. But hooray, I’m going to one, on the Parsons guest list, on Saturday, 2 December, at 12.30pm at the BBC Theatre in Portland Place, London W1.

And I have a spare ticket for any Oldie reader who enjoys the show. To apply, write me 100 words on which of the regular panellists you enjoy most – Merton, Fry, Eclair, Brandreth, Perkins, Noble?  Give reasons for your answer – and send to comps@theoldie.co.uk, catchlined ‘Just a Minute’, by 10 November, please.

The lost art of revision