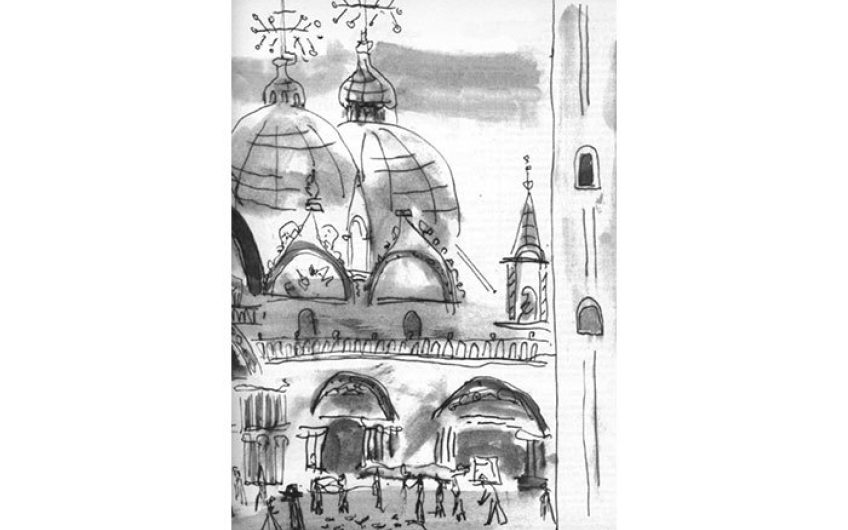 American novelist Patricia Highsmith, who would have been 100 this month, was also an accomplished artist. Here she turns her hand to Venice in December: when the fair-weather friends of Venice are gone, the working city surfaces

By now I can’t count how many times I have been to Venice, and I don’t care to. Other cities like Rome, even Paris, can become familiar, not particularly exciting on an umpty-umpth visit, but Venice never. Venice is always a surprise, a shock, a miracle, unreal and yet real. And this city built on water does us the favour of staying the same. No high-rises, no neon lettering, no hoardings and, best of all, no cars.

A few minutes after disembarking from a train or a plane at Marco Polo airport, one is gliding along in a vaporetto at house and palace-steps level, keeping an eye on the luggage at one’s feet, while gazing also at the arched and pointed windows so near, the façades of faded pinks and yellows, each edifice of a different design and colour. Bridges, canal traffic, shouts. A gondolier with two passengers is trying to cross the canal on uneven water.

The Germans translated one of the titles of my books as ‘Venice Can Be Very Cold’. I am glad that I have seen Venice in winter, when it is a different city from in summer. I felt I was seeing the real Venetians, the year-round inhabitants who are squashed to near invisibility by tourists, the fair-weather friends of Venice, in summer months. Venice is darkish, cold, damp and serious at six in the morning in December. Lucky people on their way to work get a seat inside the closed part of the vaporetto, out of the chill spray. The waters can be rough, and on deck it is sometimes not easy to keep one’s balance. Men in sombre overcoats and mufflers, carrying briefcases, their faces paler than those of summer tourists, stare ahead, awaiting their stop, maybe pondering a problem that lies on their desks. Here are the secretaries, plumbers, shopkeepers who haven’t the good fortune to live over their shops, bank officers, artisans who work in leather and metal, technicians who repair television sets and refrigerators. Venice functions as a city, of course, as does Paris or London.

In winter Venice tries to recover after suffering the hordes of tourists, the weight of sandals, sneakers and bare feet on its pavements and curved bridges. Venice sweeps up sandwich boxes, candy wrappers and ice-cream sticks, and assesses the damage done to frescoes due to human exhalation and sweat. And how are the bridges holding up? Another tiny crack has appeared?

Was it in summer or winter that I discovered the Trattoria della Città? Its name is written small in black letters on a lantern that overhangs the doorway. It is in one of the ‘ordinary’ streets or lanes of Venice, the kind that one wanders into by mistake and stays with, because it is fascinating. One glimpses through an open door a workshop with open fire going for the heating of metal, dark interiors where tools hang that seem not to have changed since the days of apprentices like Palladio. But the trattoria – it was a find, I thought when I stumbled on it, a serious place for regulars and businessmen, not for tourists who like to see and be seen. White tablecloths, a newspaper rack, a couple of potted palms for decor, and a superb, fresh, frito misto with parsley and a generous hunk of lemon. Prices moderate. A few years later, with a friend, I tried to find this restaurant and couldn’t. Typical of Venice or typical of myself. One day I’ll find it again.

To walk in Venice without a map is to get lost soon in a maze of left and right turnings. The 200 hundred or so palazzi on the big canals are just that, highly visible mansions (often empty). The majority of Venetians live in walk-ups four and five storeys high, in labyrinths where washing hangs on lines across the street, often across a narrow canal which is the street without pavements, where dogs and cats know where they’re going and where they live, but you don’t. Even if you’ve brought a map, has the street you are in got a name written visibly on a corner house wall? Probably not.

An artist whom I met in Positano recommended the Pensione Seguso to me. ‘Accademia is the stop,’ he said. ‘Demi-pension, if you like.’ I tried it. Address: Fundamento della Zattere 779. It is a hostelry with homely atmosphere, no chrome or aluminium when I saw it last. One breakfasts in a communal room with sufficient quietude and space, and it is possible by prearrangement to take a lunch in a sturdy sack before setting off for the Lido, for instance, in the morning.

It must have been the friendliness of the manager and staff that prompted me to install Ray, hero of my Venice novel, in the Seguso, while he had his dangerous adventure with father-in-law Coleman. Ray had a room, but was absent without a word to the pensione for several days, out of necessity. When he returned to collect his suitcase, the Seguso was sympathetic, had moved his things and kept them secure, for which Ray was grateful. I’ve heard that I have a ‘plaque’ on a wall in the Pensione Seguso for my good word for the establishment and literary effort.

A hotel of which I have good memories is the Monaco e Grand Canale with its sunny terrace almost at water level for dining and taking tea. And Harry’s Bar is two metres away, across the lane that ends in a small pier, stop number eight for the vaporetti. At Harry’s Bar, one might see a couple of celebrities, but it is less and less likely as summer and tourists set in, the latter looking for the people they have crowded out. The drinks are good if expensive, the canapés often hot, and costly.

Are level with the waters, there shall be

A cry of nation o’er thy sunken halls,

A loud lament along the sweeping sea.’

Even then, Byron and others gave thought to the lagoon’s waters lapping at low and high tide against the mossy steps, the wooden and stone foundations – pile-like supports rather – of palaces and blocks of houses.

One hears moans and groans, anxious speculations. How long can Venice last? What happened to the big balloon dam that was supposed to rise up in the lagoon at dangerously high tides and protect to some extent the mainland? Specifically the Doges’ Palace and the Piazzetta? Only a few months ago, or so it seems, wasn’t there a picture in the newspapers of Venetians carrying shoes and wading knee-deep across San Marco’s plaza? Aren’t things worse than they were five years ago? Logically, yes.

Maybe Venice is running on faith, as is the entire Italian economy, which ought to collapse and never does, completely.