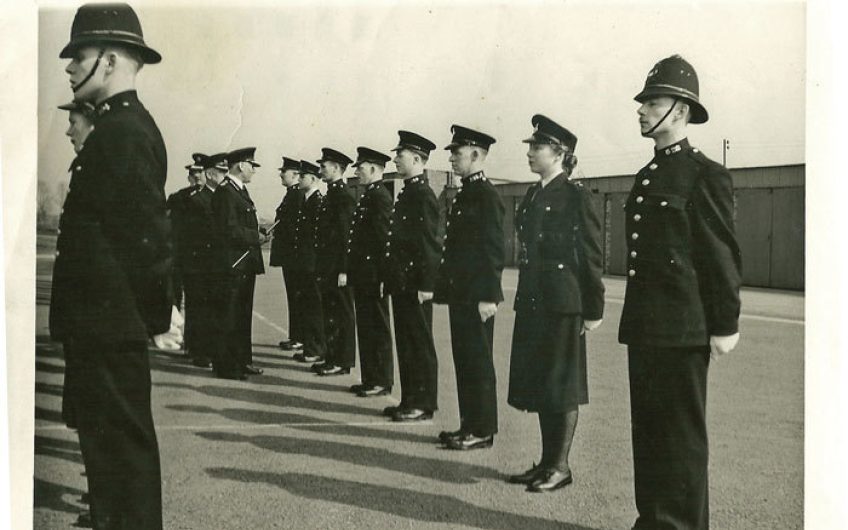 105 years ago, today, the first policewoman took to the streets in Grantham, Lincolnshire. Barbara MacArthur, one of the first women to join Cardiff City Police, remembers what it was like to be a policeman in the 50s

In the early 1950s I decided to join the police force. After thirteen weeks’ training at a camp in the back of beyond in Mill Reece, Staffordshire, I returned to Cardiff. I was assigned to ‘A’ Division in the City Centre, which included some of the Tiger Bay (docks) area, and started to pound the beat.

We mainly patrolled singly, and with no mobile phones we were very much on our own. Women constables were not allowed to carry truncheons or handbags – when we patrolled dark areas our only consolation was the heavy black rubber torch which we usually carried up our jacket sleeve.

I believe I was one of the first policewomen in Cardiff and children used to refer to me as ‘the lady policeman with the bun’. Prostitutes and pimps called me ‘Lady Barbara’...

I was paid about £7 per week plus 3/6d boot allowance. The men got a little more. I was issued with two pairs of white cotton gloves to direct traffic.When it rained I used to amuse motorists by taking them off and wringing them out.

We weren’t allowed to use make-up and we had to wear highly polished boots with thick navy-blue lisle stockings. The men wore waterproof police helmets, but the women had flat felt caps that absorbed the rain, as did the stockings, which was most uncomfortable. We were issued with ‘sensible’, over-sized, thick navy-blue knickers that reached from our chest to our knees. As we we not allowed to wear trousers this was just as well, in case we took a tumble during a scuffle. When I see the policewomen today in their smart uniforms I shudder to remember the horrible uniform we were made to wear.

Constables were not allowed to remove their thick serge belted jackets, even in the midst of summer. I did disobey that rule once when attending to a lady who’d suffered an epileptic fit and fallen down. I knelt down on the pavement, rolled up my jacket and placed it under her head. Still on my knees, I leant over to remove her false teeth, but realised that the surrounding crowd could read, in large print right across the back of my blue cotton shirt, the words ‘PROPERTY OF CARDIFF CITY POLICE’.

One of my first duties was to escort prisoners to and from prison. Once I was told to collect two boys from the cells in the Cardiff Law Courts and take them by police car for a medical check-up in the Cardiff Dock area, and thence to Llanrumney Hall Remand Home. When I went to collect the ‘boys’ I found they were well-built six-footers, who grinned when they saw their five-foot-six ‘escort’. We delivered them safely at the Hall just in time for their tea. But on another occasion I was in the dog-house when I escorted two women to a local prison. I’d searched them to make sure they had nothing that they could use as weapons, but hadn’t noticed that one of them had a large hat-pin in her headgear.

I was co-opted to the vice squad, where one of my assignments was watching and raiding a brothel. The squad resented having a woman on the team and more than doubted my abilities. I was told to stand at the top of the stairs and on no account to let anyone pass me. When a twenty-stone bruiser charged me I thought, ‘Blow this!’ and at the very last minute stepped aside. He flew through the air and landed at the foot of the stairs with a loud thump. The squad rushed out of the bedrooms, patted me on the back and said, ‘Good work!’ I didn’t tell them the truth...

We women were able to get information to pass on to the CID, as we would use the council toilets and chat with the ladies in charge who told us the latest news provided by local prostitutes and others. Also, when on duty in certain streets, we could get useful information from the prostitutes. I was once carpeted by our lady inspector for ‘being too friendly and chatting to prostitutes before moving them on’. Also for being too polite on the job – tapping suspects on the shoulder and saying ‘Excuse me’ before arresting them. Another time I was told off for saying ‘I’m sorry, I have to arrest you for...’ I was told by the inspector that I should never be sorry about making an arrest.

Most of my male colleagues were OK – but not all. For instance, one burly sergeant would often put his arm around me or pat me on the bottom. For a while I ignored it until one day, when he grabbed me, I started to tickle him. To my surprise he became absolutely helpless. He fell to the floor and I fell on top of him – but didn’t stop tickling him. All the men were laughing until, suddenly, the inspector in charge walked in. I believe he must have known what was going on because he just ignored us and didn’t say a word.

Occasionally, during the evenings, I accompanied a female sergeant to walk from the middle of town to the end of Bute Street in Tiger Bay, popping in to each pub on the way just to check on things. One couldn’t help but notice that as soon as we entered the front door of the pub there would be a swift exit by several customers through the back door! We always made a quick note of who they were.

Another of our duties, called ‘showing the uniform’, was meant to be a deterrent. We were to patrol an area but not arrest or report anyone unless absolutely necessary. On one occasion I was told to patrol the Castle grounds as reports had been made of ‘peeping toms’ watching ‘courting couples’. I noticed a couple near some bushes with a man hiding behind a tree watching them. I shouted loudly to warn the couple ‘Someone is watching you!’ To my surprise, two red-faced men ran out, adjusting their trousers. Another time I came across an American sailor who had had a few too many and was trying to sleep it off on a park bench. Unfortunately he had forgotten to button his flies. We had been instructed to arrest any drunken American sailors and hand them over to the American shore patrol temporarily based at the police station in the Law Courts. I didn’t want to get him into trouble. The buttoning was complicated so I pinned-up his flies with a couple of safety pins. Later, I wondered what he thought when he sobered up and saw the pins.

The American shore patrol regarded WPCs with some derision. One of them once said to me ‘Ever been in a bar-room brawl, ma’am? Ha ha!’ I think they thought we were there just for decoration. Once I had to arrest two men in town for two different offences. A police car arrived and we took them to the police station. There were shore patrol officers on each side of the entrance, twirling their night-sticks. My male colleague had a big grin on his face when he saw the open-mouthed Americans watch me drag both prisoners by their arms into the cop shop.

Cardiff City police were, in those days, known to be penny-pinching. When other forces in the country sent police to pick up a prisoner from another county, they sent two police to each prisoner. Cardiff city used to send just one. That meant that, for instance, when I accompanied a CID officer to pick up a man and woman prisoner from Bristol, by train, when they used the lavatory, we had to go with them, but we dared not use it ourselves. It could be problematical and uncomfortable. Also, even though we left Cardiff late in the day, the CID Superintendent told us that we were not allowed to stay the night. He wasn’t concerned with our morals, he said, but with the expense.

In retrospect, I realise the reason I joined was not just because I wanted to do useful work, but also because I was quiet and shy and suffered from a lack of self-esteem. I wanted to jump into the deep-end of a job where I would be forced to gain some self-confidence – rather like the person who is scared of the dark and so makes a point of going into the darkest places to try to overcome their phobia. As a police officer I found I was not the person I thought I was, and soon discovered that I revelled in dealing with danger and with situations that demanded split-second decisions and prompt action. I was sorry to leave the force and thoroughly enjoyed my time there.