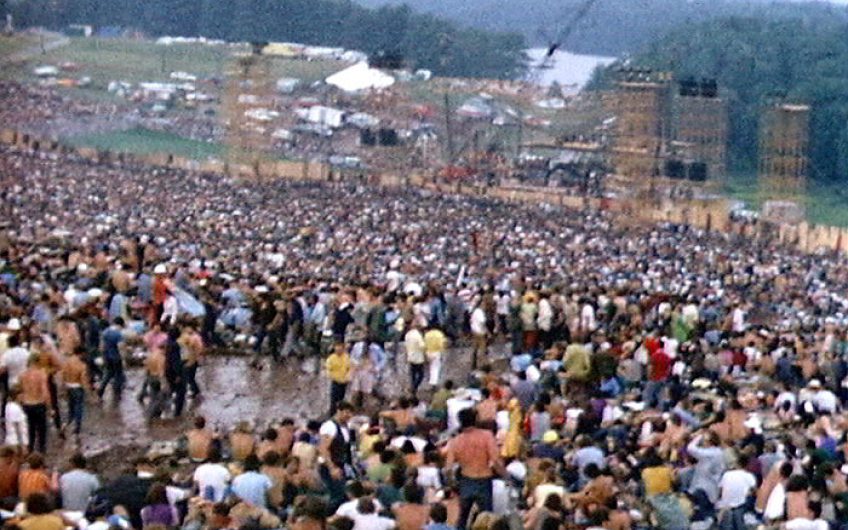 The Woodstock festival took place 50 years ago this weekend – and it seems to have been going on ever since.

All subsequent gatherings of drunk, drugged, semi-naked folk frolicking in rain-soaked fields while having their ears blasted by gigantic PA systems owe pretty much everything to what happened on Max Yasgur's farm in New York state in August 1969.

In that rock'n'roll kind of way, the Woodstock event didn't actually take place at Woodstock (just as one of its phenomenal offspring, the Glastonbury Festival, has never taken place at Glastonbury).

The organisers quickly abandoned the idea of staging Woodstock at Woodstock (a quiet rural retreat whose residents included the likes of Bob Dylan, the Band and Van Morrison) and finally settled for farmland at Bethel, 60 miles to the south-west.

They had hoped that Dylan himself would emerge from post-motorbike-accident seclusion to top the bill. But Bob – not one to do the obvious – chose instead to have a family holiday on the Isle of Wight and headline that island's own more intimate fest (a modest 150,000 people compared with Woodstock's 400,000).

The Woodstock crowd had to content themselves with listening to the likes of Joan Baez, Ravi Shankar, Santana, the Grateful Dead, Janis Joplin, Joe Cocker, The Who, and Crosby, Stills, Nash and Young.

Oh and Jimi Hendrix playing THAT version of The Star-Spangled Banner, the one that took America's national anthem and turned it into what sounded like a cathartic psychedelic freakout. The arguments have raged for half a century as to whether it was a howl of protest or just a wild celebration – and Jimi never really explained before he left the planet.

Michael Lang, now 74, one of the creators of the first Woodstock (and its 25th and 30th anniversary reprises) finally had to admit defeat in his attempt to stage 'Woodstock 50' this month, after problems with venues, artists and funding (the usual stuff).

But a smaller three-day event is going ahead this weekend at the Bethel Woods Center for the Arts, located on the site of the original festival. It features Santana and John Fogerty (of Creedence Clearwater Revival), who both played there 50 years ago.

And simultaneously, two miles away there, is the even smaller Yasgur Road Reunion, featuring the Jerry Garcia Band, sadly without Jerry himself, since this most famous member of Woodstock veterans the Grateful Dead has been dead for 24 years.

Just as every political scandal since Watergate, has had the suffix '-gate', it seems that just about every festival is Something-stock.

Some of my musical friends are playing at next weekend's Woodfordstock – at Woodford in Northamptonshire. And I have to confess that I am organising (and playing at) the third annual Kettstock next month, a free two-day festival in Kettering, 10 miles from there.

My favourite '-stock' is perhaps the folk and roots music festival that was held in Kent this year called Chickenstock.

Although not so long ago in the US (and I'm not making this up) there was even a festival of short films made entirely from stock footage called Stockstock.

We children of the Sixties won't be here in another 50 years' time. But Woodstock goes on for ever...