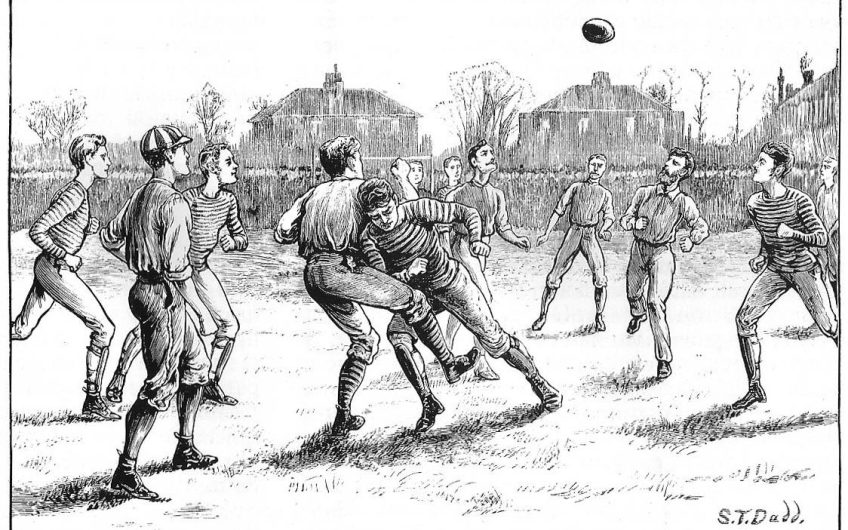 The aristocrats of football were bound to lose in the end, Julian Fellowes tells James Hughes-Onslow

With the Cup Final postponed and football clubs cutting their players’ pay, Prince William, as President of the Football Association, should be taking a keen interest in the latest drama by Julian Fellowes, creator of Downton Abbey.

The English Game, a six-part series which started on Netflix on 20 March, tells how the Duke of Cambridge’s old school, Eton College, dominated the game in the late 19th century but were eventually beaten by working class professionals from Lancashire and Glasgow.

It follows the careers of Arthur Kinnaird, Old Etonian and later President of the FA, and Glaswegian former stonemason and Lancastrian millworker turned footballer Fergus Suter.

The OE team, founded by Kinnaird, was the last amateur team to win the FA Cup in 1882. Many of Kinnaird’s chums believed football was a game, not a profession, and should be kept that way, while working class boys believed they had a right to earn a few shillings to entertain their followers.

Eventually the Etonians were beaten by Blackburn, but not before riots had broken out on the field, convincing many toffs that the game had gone to the dogs. Kinnaird takes a sympathetic and sporting view of his opponents but his father Lord Kinnaird, a City businessman played by Anthony Andrews, thinks he is wasting his time.

Several leading figures have been left out of the dramatic birth of the modern game, which was filmed at Eton.

Lord Fellowes tells me, ‘I am very aware that we did not deal with Henry Hughes-Onslow (another OE president of the FA) or his fellow amateurs, because we took the view that we were telling the story of how the working class teams, with their demands for professionalism, won control over the public school teams who wanted to protect football for the amateurs, and there was a limit to how much we could go into the merits of those who were on the other side.'

‘It is interesting that, unlike rugby, where the amateur sport retained its hold on the public imagination until quite recently, amateur football did not exercise the same power, and had really slipped out of the front line by the turn of the nineteenth century. Even though there were many wonderful players, including Henry Hughes-Onslow, the professional game took over.’

A year ago, the Duke criticised football clubs for the way they treated young players.

He accused clubs which fail to support the mental health of their players of a “dereliction of duty”, saying the habit of treating them like “financial assets” must change.

The Duke warned that too many clubs simply drop young players if they fail to reach a required standard, with no thought as to how to support them in building a new life.

Speaking at Windsor Park stadium during a visit to Northern Ireland, the Duke said footballers should be given “key building blocks or support” instead of just being told to “move on.”

The Duke also raised questions about the resilience of the next generation, questioning whether a “win-win” mentality of children’s sports - in which youngsters are protected from ever losing - would leave them struggling to cope with life as they grew up.

Perhaps history is repeating itself, with the Old Etonian President of the FA backing the players this time.