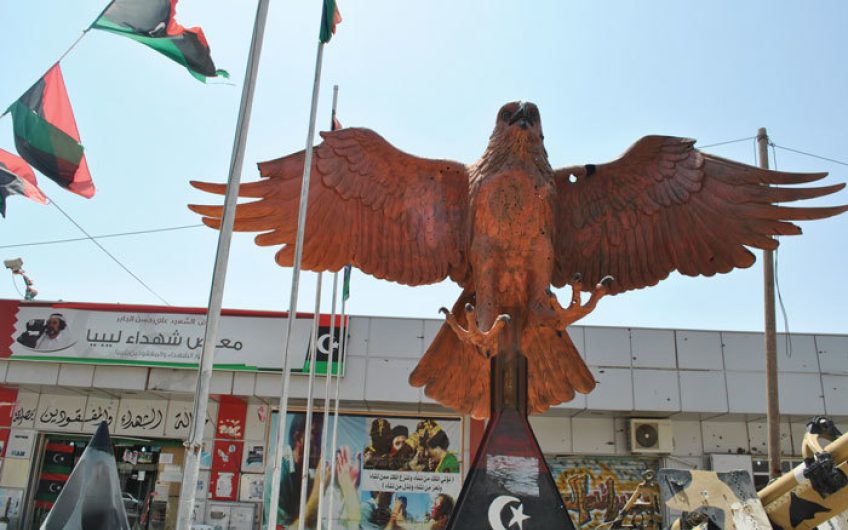 The military compound of Bab al-Azizia was not just the home of Colonel Gaddafi, his family and his security thugs. For more than thirty years, this was the most dangerous place in Libya. There is scarcely a war memorial in the country that does not bear the name of some despairing young man foolish enough to have approached the complex demanding to tell the so-called ‘Brother Leader’ precisely what he thought of him.

I first toured the six square miles of Bab al-Azizia at the end of August 2011, shortly after the capital fell to rebel fighters. The entire populace seemed to have smashed their way into the place, determined to fill their trucks with looted booty and the skies above with celebratory gunfire. In those euphoric days which heralded the fall of the

dictator, Libyans celebrated the advent of a new free Libya and called for Bab al-Azizia, its barracks and torture chambers to be razed and the area turned into a people’s park.

But there is no park, only the detritus of a fallen regime. Dreams in Libya have turned sour just as they have in Egypt, Tunisia and elsewhere in the region. The so-called ‘Arab Spring’ appears only to have been the ‘boing’ sound made by Pandora’s Box springing open. Like much of Libya, Bab al-Azizia has been reduced to ruins and is governed for the most part by militiamen.

The militias fill a troubled vacuum left by Gaddafi. Libya is now a country with a governance-shaped hole at the centre. There is little central, and not much local, government worth talking about. Neither police nor army are strong enough to take on the militias. Heavily armed young men in grubby T-shirts call the shots. At Bab al-Azizia, it wasn’t long before we were accosted by three militiamen who accused us of being spies and threatened us with arrest. It was a pattern wherever we went in parts of Libya under militia control. As in Egypt, journalists attract unwelcome attention. In Benghazi, two local reporters have been murdered in recent weeks.

Libya has an army, a parliament and a prime minister but at the moment they are all too weak to face down the militias. After all, the militia brigades won the war against Gaddafi. ‘Libya has had bad masters for generations,’ I was told by Mukhtar al-Akhtar, the leader of the Zintan militias. ‘Before Gaddafi we had a tired old king and before him, Mussolini. We don’t trust the politicians we have right now and we may never trust them.’ Understandable perhaps, but the reluctance of the militias to lay down their arms and go home is creating a security crisis.

On my recent trip around Libya for BBC Radio 4’s The World Tonight we travelled across the country to experience the power of the militias first hand. In Tripoli we saw fierce battles as they fought among themselves. In Benghazi we visited the abandoned headquarters of the main militia governing eastern Libya, the so called Libya Shield Brigade. Days earlier, more than thirty protestors had been gunned down by militiamen, who then fled. A few minutes after our arrival, we received a visit from a group of Kalashnikov-toting delinquents claiming to be from ‘internal security’.

The Benghazi militia are an assortment of former rebel fighters, criminals and around 250 al-Qaeda terrorists – it is almost impossible to know who’s responsible for which crime. The al-Qaeda bunch are blamed for the murder of former US Ambassador Christopher Stevens last September, and the former rebels rightly get the blame for the

massacre of the protesters. But as for the other assassinations and bombings – who knows? More than likely these can be pinned on some of the 1,000 thieves and cut-throats who were sprung from jail during the chaos of the revolution.

We could discern a semblance of order only in Misrata, a three-hour drive to the east of Tripoli, and in Zintan in the Nefusa mountains, 136 kilometres southwest of the capital. Ironically, both cities bore the brunt of the fighting in 2011.

‘We’re not talking about a quick fix,’ Dr Sadat el Badri, the urbane Mayor of Tripoli, told me. ‘At the moment we’re bogged down by day-to-day problems. In Tripoli we have no sewage system and a heavily polluted shoreline. Issues like this are going to take a generation to solve, even if we achieve security.’

Danton’s observation that revolutions can devour their own children seems to be borne out by events in Egypt and Syria and could yet be true of Libya.

Tobruk’s militia in eastern Libya recently announced its own voluntary dissolution; no one really knows which direction the revolution in Libya will take – but at least there are glimmers of hope.