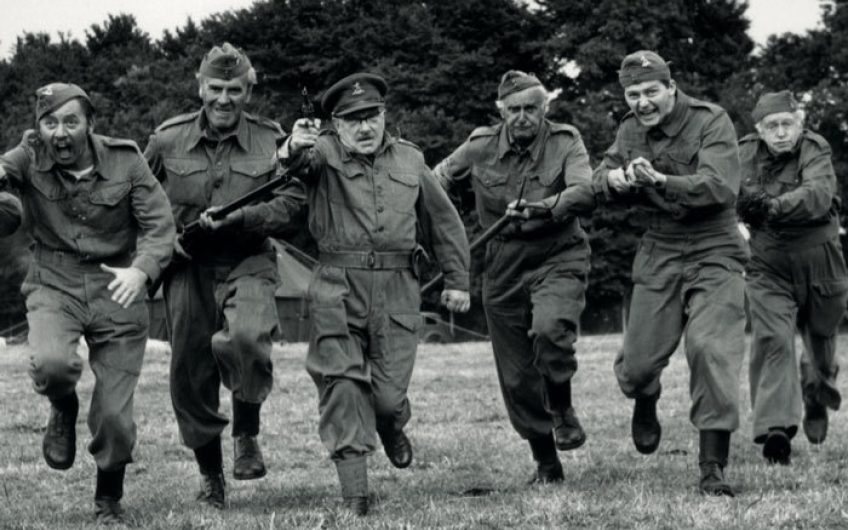 If I had the proverbial pound for every time I were asked the question... It would have to be two questions, really, at 50p a time. The first question is: ‘Can you say your line for us?’ Well, strictly speaking, it was Arthur Lowe who said, ‘Don’t tell him, Pike!’ And the one that so many people get round to, eventually, is: ‘Go on, tell us, what were they really like, Mainwaring and Wilson?’ And it saddens me.

It saddens me that the majority of enquirers are either incredulous or disappointed to hear, from me at least, that John le Mes and Arthur Lowe were not permanently at daggers drawn; and never needed to be persuaded to be available at the same time next year for the next series.

Over ten years, we made eighty TV episodes, 67 radio recordings, played the stage show in the West End for a year and worked together in various other TV, plays, radios, and pantomimes, in various combinations. And now lost episodes of the series are to be remade, with Bernard Cribbins as Private Godfrey, Robert Bathurst as Sergeant Wilson and Kevin McNally as Captain Mainwaring.

We played together – and I use the term ‘played’ advisedly – for about twenty per cent of those ten-plus years; and I never heard the word feud used until a few years ago.

When, three years ago, the research began for the mildly amusing and mildly truthful docudrama of how Dad’s Army got to your screens, I asked the researchers why they wanted to speak to me. The show was already in production when I auditioned for Pike and I knew nothing about how it got to our screens. ‘Ah yes,’ the reply came, ‘but we think it will be far more interesting when we get to later on and find out the truth about the feuds between the cast.’ Well, I’m sorry, but there are no fiftieth birthday revelations of that awful truth about DA – from this direction, at least.

We spent an awful lot of time working together – and playing – but we none of us lived in each other’s pockets. Some saw more of each other than the rest, but isn’t that true in any group who work together? I saw quite a lot of Clive Dunn and Arthur Lowe, but it doesn’t follow that Jimmy Beck and I couldn’t stand working with each other. What did follow for me was that each year brought the joy of another couple of months to learn from John Laurie and Arnold Ridley about their very different wars and lives. There was more time to learn about jazz and movies from John le Mes at Ronnie Scott’s; more to learn about variety theatre from Clive and Bill Pertwee; more to learn about doing my job.

My theatrical education as a kid in post-war Birmingham had been essentially variety at the Hippodrome, pantomime, all those radio comedies and plays, and Saturday morning cinema at the Danilo cinema in the shadow of the Austin motor factory. A few years later, in 1968, there I was, this sprog of sprogs, in a hotel lounge on location in Thetford, literally sitting at the feet of this crowd of childhood heroes, listening to the story of their lives. It took no time at all to realise that here was a group of disparate people and players from all parts of the business who, like any gathering new cast, had got to nd a way of working together.

David Croft told me a few years later that he had said to Jimmy Perry after the first recording, ‘If this lot can get on, we could have a hit here.’

On the middle weekend of the location filming of each new series, David Croft and his wife, Ann, would host a dinner party for us. On one of the later occasions, dear John Laurie had the floor and began to speak along these lines. (Imagine, if you will, his beautiful Dumfries accent.)

‘David, Ann, once again we have to thank you for a splendid evening and once again, let’s not forget, for continuing to employ this strange mixture of strolling players. And we are strange – make no mistake. Let’s just look at ourselves. There’s young Lavender here, green, wet behind the ears, peely-wally but enthusiastic. I’ve taught him everything he knows, but not everything I know, and he’s kind enough to give me a lift now and then.

‘Billy Pertwee, who keeps us entertained with his jokes from the end of the pier and folderols. Yes, Billy, you keep proving to us with those jokes that the old ones are indeed the old ones.

‘Clive, who started playing his seventy-year-old man when he was seventeen in a prisoner-of-war camp and still plays the same character to this day.

‘My dear friend Arnold, who has tried everything but not quite succeeded: playwright, producer, film-maker, and actor, of course, recently to be heard in The Archers.

‘John le Mesurier, occasional stage work, much television and every other British lm made since the war but, if truth be told, a dilettante.

‘Arthur, our dear leading man, who started in weekly rep after the war, progressed to singing second tenor in Harry H Hanson’s number-two tours of indifferent musicals, on into TV soap and then situation comedy.

‘And that leaves me... me, with an extensive stage career... who has appeared in quite as many films as John, some of them quite good to me, too, who has played every one of Shakespeare’s leading men except for Henry VIII and because I was too thin. Me, who was considered by many the best Hamlet of the Twenties, now settled into a bucolic semi-retirement and now, now, I have become famous for doing this crap!’

We all laughed a bit, only a bit, because we were now almost laughed out into silence. He had summed all of us up in a couple of sentences each, and we all knew each other pretty well; so we could and did laugh at ourselves and each other mightily. I like to think that we knew each other so well on and off stage that we knew our bad bits as well as our good, but I was unaware that any of us had to get over a feud in order to do more television shows. On the other hand, none of us was required to be bosom buddies when we finished work.

John and Arthur may not have spent a lot of time together socially – how many double acts do? But you don’t produce some of the most delicate touching scenes and then pure physical farce, like John and Arthur, did with a feud going on around you. There was not a lot of feuding around when Arnold and John Laurie would be found talking, talking late into the night about their awful common bond, the First World War.

We are all of us using part of ourselves in our characters; so, yes, Arthur was at times pompous – which is what people want to know – but before that he was something of a shy man, a very private man. He chose, like anyone else, to decide who was and was not allowed into his bubble.

Until then, he took the social risk of using the pomposity to keep people at their distance. In Dad’s Army, there were at least another seven people ready to burst Mainwaring’s bubble. In real life, it was Arthur who did the bursting.

Little did I know, on that first day we all met to go o on location filming, that he was going to become not only one of the seven new people to work with; but one of my seven new teachers each summer, and eventually seven new friends. The down side of having these seven new older friends was that I was going to lose them early in my life. I was not long out of teens and they were my dream oldies.