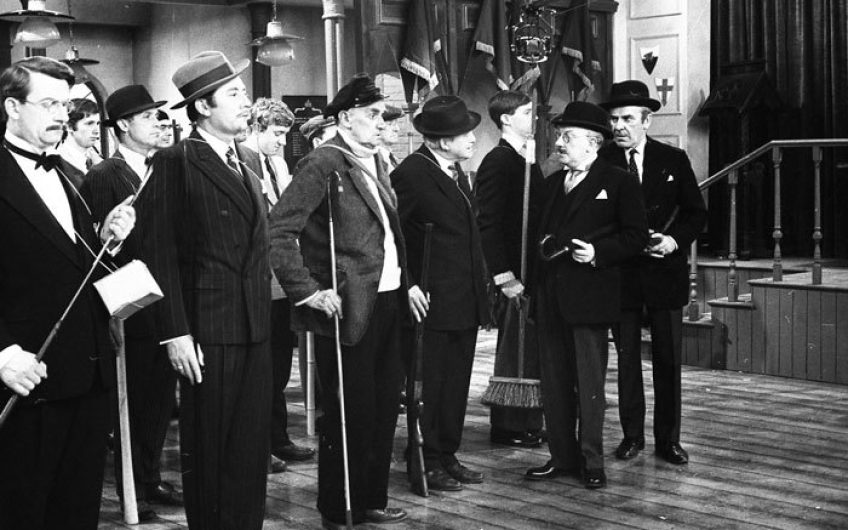 The deaths of Frankie Howerd and Benny Hill prompted their immediate resurrection as the gods of comedy-like-it-used-to-be. But is comedy really not as funny as it was? And was it ever as funny as it’s supposed to have been?

The actor Derek Nimmo described what it was like to hear ITMA (It’s That Man Again) again, the ‘wondrously funny’ comedy that kept his family going during the blitz. ‘I’ve never been more disappointed,’he recalled. ‘It was bigoted, and the humour had died.’

The superiority of vintage comedy can be a nostalgic illusion, and one reinforced by the best compilations. But this should not be represented as the whole truth. For the sad fact is that in the Sixties and Seventies the television sitcom went through a golden age which has not been recaptured. In the last ten years, very little has been produced to rival Steptoe and Son, The Likely Lads, Till Death Us Do Part, Porridge or The Fall and Rise of Reginald Perrin.

A shortage of good writers is not the reason. The decline of the Great British Sitcom has its origins in the lack of decent producers. Put simply, the problem is this: in the Fifties and Sixties, when television was expanding rapidly, the likes of John Howard Davies (pictured in the last Oldie issue as the star of Oliver Twist) and David Croft were able to move into positions of responsibility fairly quickly. Howard Davies, the man behind Steptoe and Son, Fawlty Towers, Monty Python and The Good Life, was made a producer within two years of joining the BBC.

Croft, who also produced Steptoe and Son, not to mention Till Death Us Do Part and Dad’s Army, joined Rediffusion directly as Head of Comedy Scripts, then went straight to the BBC as a producer.

Others, like Dick Clement and Ian La Frenais, found it easy to get their work broadcast on merit.

Since then, however, the fast lane has closed. If those same people joined today, they might have to wait 20 years to start producing. The crush of applicants trying to get into BBC television comedy has produced a dead- men’s-shoes career structure, a slow conveyor-belt where comic ability counts for less and less. It is not just the speed at which those on the conveyor belt are moving, but the jobs they do on the way.

First, aspiring producers work on the studio floor. Then they might progress to production manager, a post that combines accountancy with fixing up shoots in launderettes. Next comes the position of director: making the finished product look good. Only then, after years of apprenticeship, does the producership hove into view. It is therefore only when the careerist has finally achieved full creative control of a programme that he is expected, for the first time in his life, to make a decision on whether a script is funny or not.

To the truly committed this is unbearable. Invariably they look elsewhere, towards radio or towards writing and performing. The career path to producer- ship appeals instead to the careerist who is merely interested in getting to the top of the tree, any tree. There are, of course, exceptions, dedicated enthusiasts who are prepared to sweat it out; but in the main, comedy producers tend to be experts at television and amateurs at comedy. This is the wrong way round. Television techniques can be learned but an understanding of comedy is usually instinctive.

By this time the astute reader will have noticed the absence of ITV. There, comedy producers usually scale a similar career ladder, but their numbers have traditionally been augmented by one or two experienced BBC men who are well past their sell-by date. This may explain why ITV has barely produced a decent sitcom since Rising Damp.

To some extent it is easy to see why neither BBC nor ITV comedy departments have been willing to take risks with relatively untried producers. Television has become more expensive by the year, so that the budget for a half-hour sitcom is now well into six figures. Nevertheless, someone must start taking these risks.

The independent production companies have taken a lead in this area, recruiting heavily from BBC Radio Fight Entertainment, where technical accomplishment counts for less than comedy skills. Guy Jenkin and Andy Hamilton, writers and producers of Channel Four’s award-winning Drop the Dead Donkey, both come from this background.

The only way to bring back the great days of BBC sitcoms is to sweep away the career structure; or more precisely, split it into two. The ‘technical’ career path from the floor to the director’s desk is a logical progression of functional tasks that makes some sense. The ‘comedy’ career path, if there must be one, should be separate altogether, perhaps involving a progression through the script side.

Whoever brings about this change faces the fury of the dispossessed: those whose careers will be nipped in the bud, in some cases destroyed, by the realisation that they will never make it to producing. But it will be a brave step, and unless it is taken, the sitcom will never be restored to its former glory. The old days when talented amateurs could come in, spend a year or two learning the tricks of the trade and then get on with it may be gone; but unless something akin to that situation is recreated, we’ll be stuck with ‘My ex-wife the bank manager next door’ comedies for ever.