The inner-workings of a 1964 newsroom 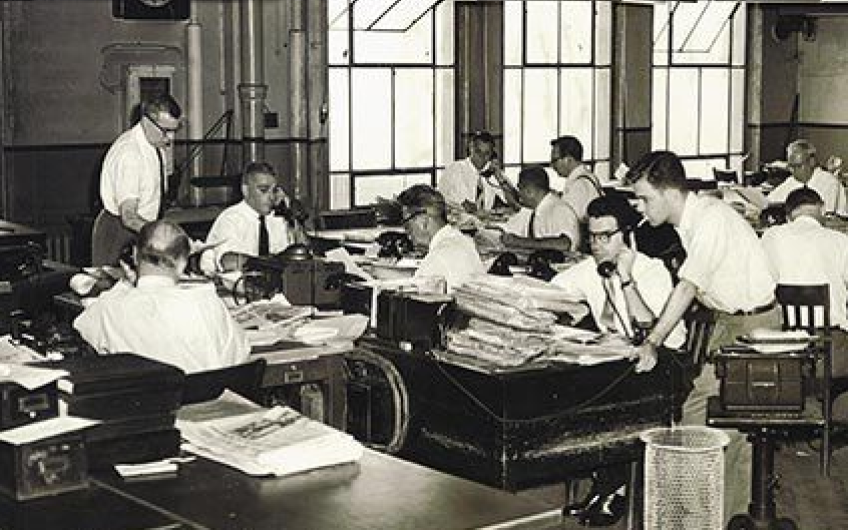 After interviews for some stultifyingly boring jobs, I realised that I was entering another world. I was to be the most junior in the Times newsroom. This was in 1964, the time of the Astor family's ownership, Sir William Haley was editor, the front page was still a no-news blur of small ads, reporters were not given a byline and everyone considered it such an honour to work there that decent salaries were pie in the sky.

Arriving at 9.30am, my first jobs were to change the blotting paper on each desk; to answer the Central 2000 telephone number with the words 'The Times, Good Morning' and be prepared for absolutely any question ( 'Why are the flags flying at half-mast?'); and to start reading the Times and all the other newspapers we all had to be on the ball. The others trickled in, full of chat and jokes. John Grant was the home news editor, a Lancastrian with a shock of yellow hair, a big laugh and a store of positive energy.

Quite novel at the time, all our five desks connected in a close and practical layout so everyone could talk to the others and pass pieces of paper about with ease. Next to the newsroom was the reporters' room. They came and went, clattered away on their manual typewriters, hung on telephones and had time for a chat with me.

However, I did get a black mark when, not knowing what the word 'teetotal' meant, I booked a dry hotel for the reporter covering a party political conference. The reporters were diverse, intelligent, erudite, fun ­ and usually ambitious. Norman Fowler (now Lord Fowler) was one, as was the late Philip Howard, who became editor of the TLS and the author of several books. Nearby was another room with a long horizontal line of tables, fed by the messenger boys and staffed by men with green eye-shades, hunched over, reading at speed and busy with their black marker-pens. These were the sub-editors. The quietest room of all was the readers' room, where elderly gentlemen spent their time reading proofs ­far better than any modern spell-check.

Being invited to see the paper being 'put to bed' in the evening was really exciting the typesetters working by hand at lightening speed, the hot smell, the frantic activity and, finally, the great rollers speeding up and producing the first piles of next morning¹s newspaper.