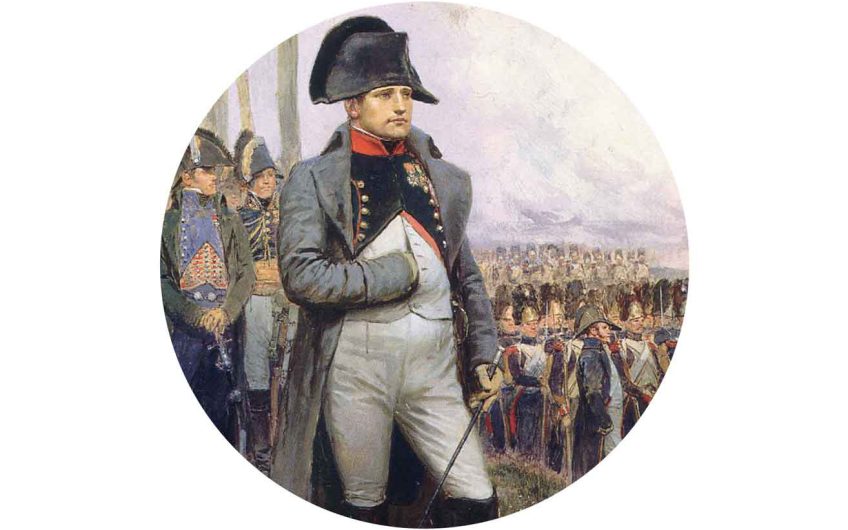 The Emperor and the Duke both wore bicornes – in different styles. Now their hats are united, thanks to Nancy Astor. By Justin Davies

There are two bicornes (‘two-horned’ hats) in the Citadel at Bayonne, south-west France, that were once worn by the Emperor Napoleon and the Duke of Wellington.

They aren’t there as relics of the long, arduous Peninsula campaign between Napoleon and Wellington’s armies from 1807 to 1814.

Instead, they arrived in France in October 1945 on a Halifax bomber, as a gift from Nancy Astor, the first woman to take a seat in Parliament. They were given by Lady Astor in the name of the British nation in recognition of Anglo-French comradeship and the valiant services rendered by the French SAS.

Napoleon’s bicorne is one of about 120 made by the Parisian hat-maker Poupard; around 20 are known still to exist. The Duke of Wellington’s was made by Moore of Old Bond Street. Wellington’s is more complex – with plumes and gold braid – than Napoleon’s simpler chapeau.

British general officers didn’t mind much about the plumage and gold braid sported on Wellington’s fine example. They wore their hats ‘fore to aft’, front to back, rather than sideways. Wearing one’s hat this way supposedly made brandishing a sword easier.

Napoleon ordered a new hat every three months. They were designed specifically for him. He wore his bicorne sideways. Sideways was the fashion until 1800. Napoleon retained the style, sporting it at the 1815 Battle of Waterloo.

Worn in this way, often with a simple grey overcoat, but bereft of gold trimmings and finery, the sideways bicorne made Napoleon distinct to his troops but prevented him from becoming a prominent target for the enemy. Napoleon kept on wearing his beloved bicornes until his death at the age of 51 on St Helena, 200 years ago, on 5th May 1821.

It is not known when the two hats were worn – the suggestion they were both worn at Waterloo has not been proved. Nor is it known when they were acquired by Lady Astor. The gift to the French SAS was deliberately discreet and not given publicity.

The Waterloo historian Gareth Glover reminded me that we know more about Napoleon’s iconic hat than about Wellington’s – the Iron Duke was better known for his boots.

Since the hats’ presentation in 1945, time had taken its toll. But they have now been restored, thanks to the historic links between Britain and France.

Once that Halifax landed in France in 1945, the hats were presented by Brigadier ‘Mad Mike’ Calvert, commander of the SAS Brigade, to the two French SAS regiments.

The SAS Brigade was formed in March 1944, incorporating two French regiments, the 3rd and 4th SAS, trained in Scotland. The first 36 Frenchmen of the Brigade parachuted into France the night before D-Day.

The men of the SAS Brigade fought throughout the liberation of France. And they fought far and fast in their short existence: across Brittany, south of the Loire, Deux-Sèvres, Franche-Comté and the Saône-et-Loire. They moved to the Ardennes during the Battle of the Bulge in the winter of 1944, parachuted into the Netherlands and ended the war in Germany.

The SAS Brigade was disbanded in October 1945: the French regiments on 2nd October and the British 1st and 2nd SAS regiments six days later.

The link with Nancy Astor on that Halifax bearing the hats could be found through the presence on the passenger list – and at the following parade – of her youngest son, Major John ‘Jakie’ Astor (1918-2000). A Life Guards officer, he volunteered for the SAS in January 1944 and helped train the two French SAS regiments before D-Day.

The hats are now in the safekeeping of the successor regiment, the 1er Régiment de Parachutistes d’Infanterie de Marine, who guard the traditions of the French SAS. Based in Bayonne, they are one of three French special-forces regiments. The hats are displayed in the museum at the heart of the citadel.

To remember the last battle between British and French troops on French soil, at Bayonne on 14th April 1814, the association Bayonne 1814 raised funds for the restoration of the hats.

The fundraising was finalised through the recent intervention of Algy Cluff and the Remembrance Trust. Cluff is no stranger to parachutes, having served in the Guards Independent Parachute Company in the 1960s.

The Remembrance Trust was formed in 2014. It preserves and restores neglected memorials to British and Irish soldiers and sailors that predate the First World War and the Commonwealth War Graves Commission.

To qualify for help from the Remembrance Trust, the bicornes were legally defined as war memorials.

The Trust has already restored soldiers’ graves in the cemeteries for the Coldstream and Scots Guards in Bayonne. Its work also takes it further afield, with planned projects in the Crimea, Antigua and Zanzibar.

The gift of the final part of the restoration funds has been extremely well received in Bayonne.

It has brought to light a lesser-known story of Anglo-French friendship and continues the spirit of Lady Astor’s unusual and original gift.