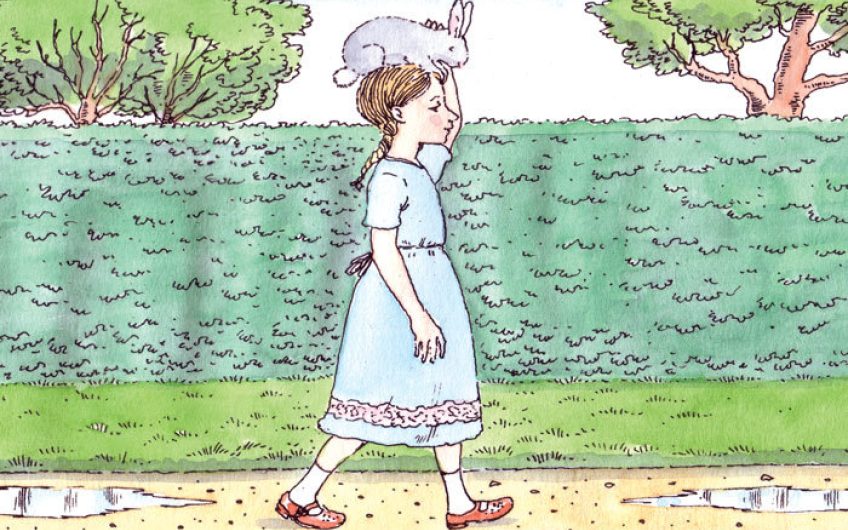 I was one of five children. We lived outside Guildford. Because our father worked in Egypt we only saw him on his summer leaves. Our mother joined him after Christmas for three months of each year; parental departures were a source of tears throughout our childhood.

On one occasion my mother, having said goodbye in the morning before embarking for Waterloo, came back later because she had forgotten her travel rug. I was about four. Two goodbyes in a day were excessive.

The worst parting happened when I was thirteen and my sister, Rene, a little older. Drenched with tears we went to the drawing-room to say goodnight to our mother. She was due to leave the next day. At the time she was involved in Moral Rearmament, the movement instigated in 1938 by Frank Buchman. He believed that time must be set aside each day to wait for a message from God. This must be passed on to fellow believers, like a sort of holy telephone service. That night she told us to kneel in silence and wait for God to speak. My mind went blank. Clever Rene was bound to get a better message than me. She did everything better.

‘He told me to be kind,’ she sobbed. Rene was always kind.

‘A lovely message,’ my mother said. ‘And you, Ursula, what did God say?’

I racked my brains; my mind was blank. Then my voice answered out of the blue. ‘He told me to be of good cheer.’

My mother was charmed. What a beautiful message. She pulled me, tall and gangly, on to her knee. Such cuddles were rare. I felt comforted. Best of all, my message got the praise.

I prayed nightly for her safety. ‘Peace, perfect peace, with loved ones faraway. In Jesus’ keeping we are safe, and they.’ Cairo was very far away. Her reliance on Moral Rearmament waned, but church-going and family prayers, with our maids kneeling with us, continued.

From an early age we were allowed to keep pets. Rabbits, rats, guinea pigs and mice were kept in a purpose-built zoo at the end of the garden. I would keep any mice that were small enough in my pockets, to comfort me in moments of stress. I think that our mother hoped that they would teach us the facts of life, to save her the embarrassment of explaining how babies came. She read us a pretty book called >span class="s2"> which told of a child’s visit to Babylon. I preferred to believe that our pets held secret marriage services, with one of their number acting as vicar before babies arrived the next day. I was fifteen and at boarding school before I learned the truth.

My special rabbit, Sebabi – short for Sebastian – had his own cage and nesting box with a removable roof which was kept outside the zoo. Each time I went near I called ‘Hello, Sebabi – how’s Sebabi? Eh, Sebabi?’ and he would hop towards me.

One night I was woken by a prodigious storm. I began to worry. Sebabi might need me. Did the thunder mean that God wanted me to go to him? I was too afraid and lay still, ignoring God’s word.

In the morning the roof of his cage had blown off. Sebabi was gone. In tears I ran round calling his name. At last I saw his dear grey ears sticking up behind a cabbage in the kitchen garden. How sensible he was. I carried him about, hugging and kissing him. I put him on my head as I walked along the drive. When he fell he didn’t seem to mind. But he got diarrhoea which meant a visit to the vet. Rene came too. The vet gave him a pill but his face changed when he saw Sebabi’s leg.

‘This rabbit is no good. You’ll have to leave him to me.’

Later Rene explained. I had let him fall. Sebabi would not be back. Mea culpa. And I never said goodbye to my rabbit of distinction.

War came. One by one my sisters left home. Our maids left to serve the country instead of serving us. Our tennis court became a run for the chickens that now slept in the zoo in place of rabbits, rats and mice. The chickens supplied us with eggs when food rationing began. But I didn’t grow fond of them. They lacked character.

Moral Rearmament did little for me but Sebabi’s whiskers and twitching nose were an unfailing source of comfort all those years ago.