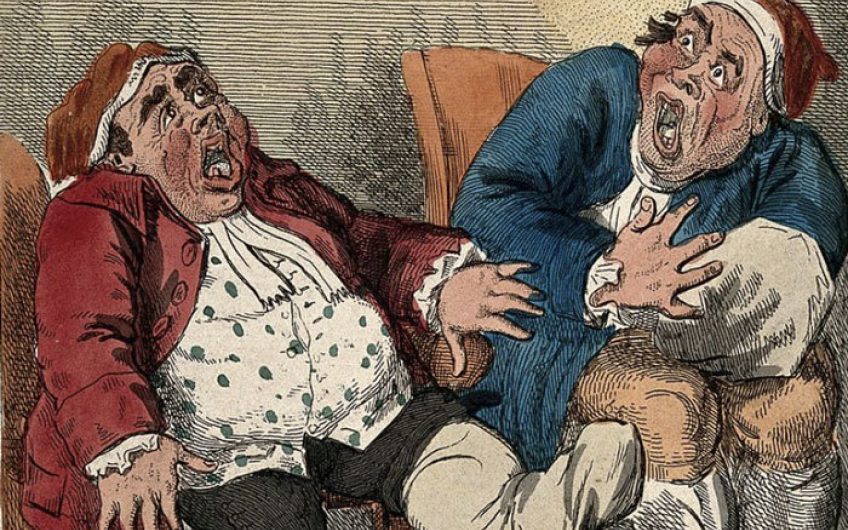 As Fatty in the Beano is renamed Freddy, Ferdie Rous says we should stop making excuses for being overweight

When it comes to being fat, I, The Oldie’s very own Billy Bunter – as our ever-charming late columnist Wilfred De’Ath used to call me – know my stuff. It isn’t fun. You’re always tired and more likely to get ill – fatally and otherwise.

While the stigma of obesity is frustrating, coddling the obese is so much worse.

So, imagine my amusement when a self-righteous bunch of my fellow chubsters decided they were sick of being ‘discriminated’ against and started banging on about ‘Fat Acceptance’. Fat Acceptance does not just ask us to stop shaming fat people; it asks us to believe that they have no choice in being the size they are.

As a fattie myself, weighing in at a hefty 22 stone, I should be loving this fightback. In fact, I find it sad; sad that people think it’s better to be wilfully ignorant of facts than to point out the terrible pitfalls of obesity. Jamie Oliver has just been attacked for telling us to eat less rubbish. In fact, he’s spot on.

The Western world is facing an obesity crisis – and Fat Acceptance isn’t helping. Another recent Cancer Research UK study predicted we millennials will be the most overweight generation ever: 70 per cent of us will be overweight or obese by the age of 44. According to Diabetes UK, the number of diabetics has doubled in twenty years, partly thanks to obesity.

But the fatties are having none of this. Last year, Sofie Hagen, a comedian, attacked new Cancer Research UK anti-obesity ads, saying, ‘Is anyone currently working on getting this piece of s*** Cancer Research UK advert removed from everywhere? How the f***ing f*** is this okay?’ That’s typical of the fanatical ‘Health at Every Size’ brigade. They’re the sort who’ll say your physique is ‘superfab’ – even when you’re unable to read your weight, standing on the scales, because your bulging paunch is in the way.

Take Whitney Thore, founder of the No Body Shame campaign, and star of My Big Fat Fabulous Life – an American reality series about Whitney, a 27-stone woman. She’s aware of the health risks of being overweight – but still claims that ‘concern for health is often a mask’ for discrimination. I don’t agree. I put on three stone while I was at university. A few friends and relatives very subtly and politely pointed this out. While this was a little uncomfortable, the message was well-intentioned and right: ‘Do yourself a favour and hang around a little longer!’

The modern age is a sanctimonious age – and the fatties have fully embraced it. In America in 1969, they established the National Association to Advance Fat Acceptance (NAAFA). NAAFA’s mission is to improve ‘the quality of life for fat people’ by providing them ‘with the tools for self-empowerment through advocacy, public education and support’. In its message – and its initials – the organisation is reminiscent of the extremely admirable National Association for the Advancement of Coloured People (NAACP), the American civil rights body. The parallel between the two organisations is, I think, intentional. How shocking to equate the difficulties, past and present, of the black community and the fat ‘community’. It’s one thing to disguise the fact that being fat is bad for you; even worse to appropriate the language of those who have been genuinely historically oppressed.

One of the leading Fat Acceptance activists, Kelli Jean Drinkwater, gave a prominent TED talk in 2016, called ‘Enough with the fear of fat’. In her language, she perpetuated the idea that race and size are comparable. The terms she used – ‘people of size’, ‘fatphobia’, ‘thin privilege’ and ‘fat discrimination’ – tap into the shared language of the oppressed. I’m sorry but being fat does not make you part of an oppressed group.

The fat activists have spectacularly missed the point. The whole issue isn’t about size, but shape. We should be accepting the things you can’t change; not the extra pounds you can lose.

Modern society has developed an unfair, unrealistic view of body shape. Staring at airbrushed, retouched images of size-zero models with unrealistic curves and waists – or the most immaculate six-packs – has given us a deeply distorted ideal of beauty. No body can match up to the ideal that is foisted on us through the media.

We all have the right to feel happy in our own skin, patronising and clichéd as that might sound. But weighing one stone for nearly every year of your life – as I do, aged 24 – is nobody’s fault but yours or mine. Still, it’s not all doom and gloom. There’s enough time to change. In fact, I’ve just joined a gym…