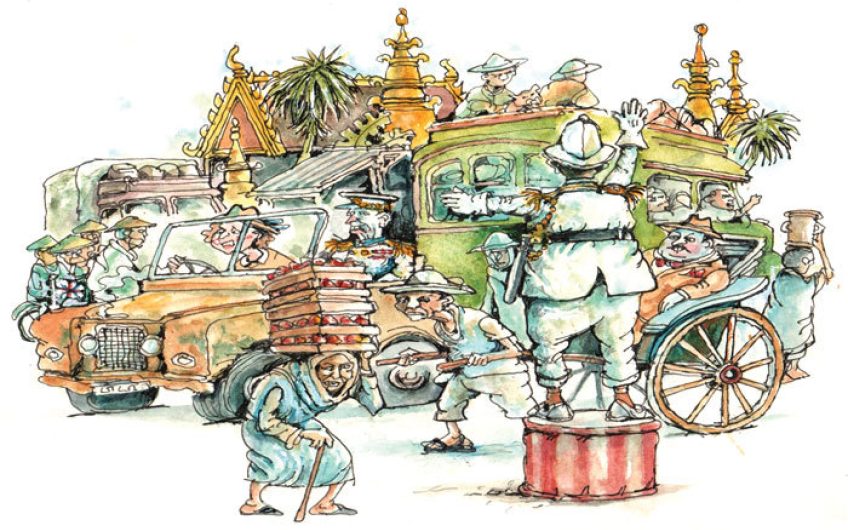 I learned to drive in Bangkok in the early 1950s, relearned in Trieste in the 1960s and then survived on Vienna’s roads for twenty years or so. I’ve never driven in England as I don’t like driving on the left. (Yes, we drove on the left in Bangkok, but that was only to annoy the French.)

My introduction to driving was unexpected and unwelcome. I disembarked in Bangkok after six weeks on a small Danish freighter with about ten passengers (you knew it was Friday because they served caviare). I was to be PA to the Military Attaché and travelled by sea, on full salary, because there had just been an instruction to reduce expenditure on air fares for junior staff.

I was met by Reg, the Air Attaché’s Clerk, who was driving a battered Land Rover which he wanted to hand over to me. I told him I couldn’t drive. ‘You’d better learn quickly,’ he said. ‘You have to ferry VIPs to and from the airport and pick up luggage and supplies.’ The good news was that the car was mine so long as I paid for petrol for personal use. I called her ‘Lotus’ and she stayed in my garage, where the night watchman, a retired Indian burglar, slept on a camp bed.

A driving licence was waiting for me – nobody asked me to take a test. People gave me a few lessons and hurriedly left town, but I soon got the hang of it. The gears were stubborn and I had to double declutch at every change down. I managed pretty well, as precedence was based on the size and obvious age of one’s vehicle. To enter the traffic you inched slowly towards it until someone decided there wouldn’t be room to proceed. The policeman at the end of my road would stop the traffic until I had turned the corner. Traffic couldn’t move fast as a solid mass of motor vehicles, tricycle rickshaws and pedestrians occupied the whole width of the road, stopping and changing lanes without warning. I don’t think I used the fourth gear much. There was another gear but I never found out what it was for.

Picking up visiting brigadiers and such at the airport (usually at about six in the morning) soon became routine, and I enjoyed the passenger’s reaction when I said casually, just as we were entering a particularly chaotic village, that I’d only been driving for a few weeks. I understand traffic conditions have changed a lot since then.

didn’t have to drive again until the late 1950s, working for the UN in Italy. My place of work moved from the centre of Trieste to a grand complex at Miramare on the coast, and could only be reached by buses crammed with holidaymakers. I applied for a loan and ordered a Fiat Cinquecento.

I was sensible enough not to proffer my old Thai driving licence, and realised I must take a proper driving course, so I enrolled in the Scuola di Guida Mambrini. That’s why I only know the Italian names for most engine parts, and swear in Italian when I’m driving.

When they decided I was ready to take the technical test I was pretty confident (even though I used to fall asleep during the lectures), as I had learnt most of the answers by heart and no Mambrini alumna had ever been known to fail. The practical driving test was touch and go as my instructor, who sat next to me, warned me that he didn’t know the examiner, so a touch on my knee would not be undue familiarity but a warning to turn the steering wheel fast and start reversing into the parking place.

I passed the driving test even though my instructor had to retrieve a hub cap that fell off when I was parking, and then I only had to wait for the licence and the car. Obtaining the licence was speeded up when Joe, the Director’s driver, found my request at the bottom of a pile and simply moved it to the top. He explained that the official was his cousin.

At last my tiny Cinquecento arrived. It fitted me like a glove. After several days driving timidly inside the garage forecourt, I ventured out alone. What a shock! My instructor had decided I obviously knew how to drive and had neglected to teach me a few essential things. So when I encountered a steep descent for the first time (there are no hills in Bangkok) I just put one foot on the clutch and the other on the brake and hoped for the best. And when I used my Thai method for edging firmly into a stream of traffic, only the magic word ‘Mambrini’ saved me from arrest.

I had many blissful journeys up and down Italy and eventually the Cinquecento and I were as one. I was in a suburb of Florence, reversing in a one-way street (how else could I get out of it?) when I was stopped by a policeman. The bystanders saw my Trieste number plate and encouraged the policeman to show no mercy, but when they heard my interesting accent they turned on the policeman and accused him of cruelty to a poor foreign lady. He then escorted me to the hotel I was looking for.

Italian traffic police were very kind and when they wanted to give me a ticket I would say ‘My husband will beat me,’ and they would let me go. Trieste was only a hop and a skip from former Yugoslavia and I came to know the coast road as far as Albania (couldn’t go further or they’d shoot you) like the back of my hand.

Its small size made the car vulnerable to hurtful jokes. One day I was waiting at a traffic light next to a lorry when the driver tapped his cigarette ash into my open roof. ‘I’m not an ashtray,’ I yelled. And when I asked a garage man to replace a screw for a number plate he shook his head and said I should try a watchmaker.

After eight happy years in Italy I accepted an invitation to return to Vienna and a much better job. I had to drive every day from home to office on a terrifying motorway. I’d driven defensively on Italian motorways, while the kindly Italians just went round me, but in Vienna I had the impression the drivers were actually trying to kill me. I was forced to buy a larger Fiat, with 750 of whatever the Cinquecento had 500 of, but I never loved it. I was inconsolable when I heard that the new owner of my Cinquecento had driven it over a cliff.

Then I retired. When I returned from a visit to Egypt it was a week before I went down to see if the car was still in the garage. I then realised that I didn’t really like driving. So I sold the car and took taxis ever after.

I’ve been retired for over twenty years and live in England now, looking back with pride and horror at my driving history.