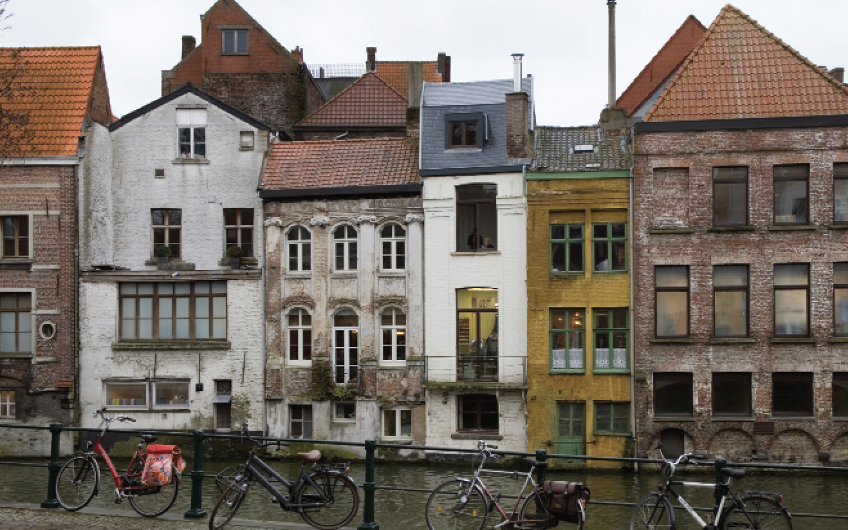 Whenever I return to Ghent, my favourite city in the Benelux, the first thing I do is go to the Groot Vleeshuis for a Belgian beer or two (or three or four) and a slap-up meal. Groot Vleeshuis means Great Butcher’s Hall (huge hams still hang from its old oak rafters) and, like loads of buildings around here, it dates back to the Middle Ages. It used to be a meat market. Now it’s a gigantic deli, full of scrumptious Flemish food and drink. I usually begin by wolfing down a big bowl of gentse waterzooi (Ghent’s signature dish, a creamy chicken stew) and then work my way through a selection of local sausages and cheeses.

I’m not normally such a greedy pig, but there’s something about Ghent that brings out the glutton in me. Pigging out in this medieval metropolis, you feel like one of those feasting peasants in a Breughel painting. It’s hard to believe that London is barely three hours away by train. For me, the Groot Vleeshuis sums up everything’s that’s best about Ghent, and why I’ve become so fond of it. It’s historic, but supremely practical. It’s picturesque, but it’s not a theme park.

Unlike its local rival, Bruges, Ghent hasn’t been overwhelmed by tourism. When you come here, you feel like part of it, rather than simply gawping at it from a tour bus. Like Bruges, it has a wealth of ancient architecture, but it’s still a workaday sort of place. The thing that makes Ghent a living city is its industrial history. While Bruges became an obscure backwater, preserving its cutesy Olde Worlde ambience, Ghent became a powerhouse of the industrial revolution. It’s not uniformly beautiful, like Bruges – but it’s a lot more interesting.

Now that its heavy industry has declined, Ghent is busy restoring its antique landmarks – its flamboyant fortress, which became a cotton mill, is now a knights-in-armour castle again. From its battlements, you get a splendid view over the mottled rooftops and cobbled alleyways below, but there’s nothing kitsch about this panorama. Sleek modern trams rattle by beneath you. The streets are lined with quirky bars and boutiques, rather than tacky souvenir shops.

One of the delights of Ghent is how easy it is to get there. If, like me, you’re sick of airports and aeroplanes, you’ll relish travelling here by train. The Eurostar from London to Brussels Midi takes two hours. Trains to Ghent leave from Brussels Midi three times an hour and take just half an hour. An Any Belgian Station ticket from Eurostar covers the entire journey, from £69 return (if you book well ahead). It’s valid on any train from Brussels to Ghent (and back again) within 24 hours of your Eurostar connection, so you can stop off for lunch in Brussels or even spend a night there if you like.

Where to stay? Well, there are three places I have slept in which I’d be glad to recommend. Hotel Harmony is a cosy four-star in an 18th-century townhouse beside a quiet stretch of the River Leie (the surrounding district, Patershol, boasts some of Ghent’s best restaurants). If you are feeling more intrepid, head for Simon Says – a hip coffee-shop-cum-B&B run by two charming Englishmen called Chris and Simon. They live over the shop and rent out their two spare bedrooms. Breakfast is served in the funky café downstairs. Both bedrooms are sparse but chic. Even if you don’t stay the night, be sure to drop by for a cuppa and a bite to eat. The building is an art-nouveau gem, and the coffee is superb.

If you would rather play safe, Ghent’s Marriott is the best of the big chains. The rooms are fairly anodyne, but the frontage is stunning, a 17th-century brewery on the waterfront, in the heart of the old town. Ghent’s excellent Design Museum is just a short walk away.

The only attraction in Ghent that’s overrun with tourists is Sint Baaf’s Cathedral, on account of van Eyck’s ‘Adoration of the Mystic Lamb’. Nicked by Napoleon and the Nazis (who hid it in an Austrian salt-mine, where it was very nearly blown to smithereens), this vast, intricate altarpiece is an artwork of immense power and beauty, an incredible depiction of the medieval idea of heaven. In short, it’s well worth seeing, even if you have to queue up to take a look at it. Ironically, the coach parties that flock to see it usually ignore the equally fine Rubens around the corner. If you hate looking at paintings amid a crowd of restless sightseers (as I do) then at least this is one masterpiece you should have more or less to yourself.

Ghent’s principal art gallery, the Museum voor Schone Kunsten, is tucked away on the edge of town, which is a blessing. Well off the main tourist trail, there is always enough room in here to enjoy the permanent collection – and what a collection. From Hieronymous Bosch to James Ensor, it’s a greatest hits of 500 years of Flemish art.

Across the road, in the leafy Citadelpark, you’ll find Ghent’s contemporary art gallery, the Stedelijk Museum voor Actuele Kunst (or Smak, as the locals call it). Even if the avant-garde stuff in here isn’t your sort of thing, the surrounding gardens are a pleasant place to wander. After an hour or so of modern art, I usually find a few trees and flowers tend to cheer me up no end.

What makes Ghent such a lively place? Personally, I reckon it’s the university. Thousands of students live and learn and laze about here, and while their scruffy undergraduate hangouts will naturally be of no interest whatsoever to discerning oldies like you and me, their grungy presence gives the city a youthful buzz, and saves it from genteel atrophy. It feels invigorating to stroll around a city with more bookshops and record shops than supermarkets (I have no idea if this is true, but it certainly feels that way).

I’m usually reluctant to recommend restaurants, as even the best ones change so quickly, but I can’t sign off without mentioning De Vitrine. It is housed in an old butcher’s shop, and the décor is delightfully simple – and so is the grub. There’s no menu, just a new set meal every evening, so you don’t have to dither over what to eat and you’re guaranteed something different every time. It’s on the edge of the red-light district – spruced up in recent years but still a bit seedy after dark. However don’t let that put you off. The meal I ate here was stylish yet unpretentious and full of flavour. Dinner costs a mere €45 (£38) each – a steal for such fine food.

De Vitrine is especially good, but you can’t go too far wrong for food in Ghent. I’ve never eaten a bad meal here, even in the most humdrum places. Why is the quality so high? My theory is that since Ghent isn’t regarded as a must-see destination, like Bruges, its hoteliers and restaurateurs have to work harder to attract (and keep) their customers. Ghent has never been remotely fashionable and long may it remain that way. For me, it’s not just a city break. It’s somewhere that almost feels like home.