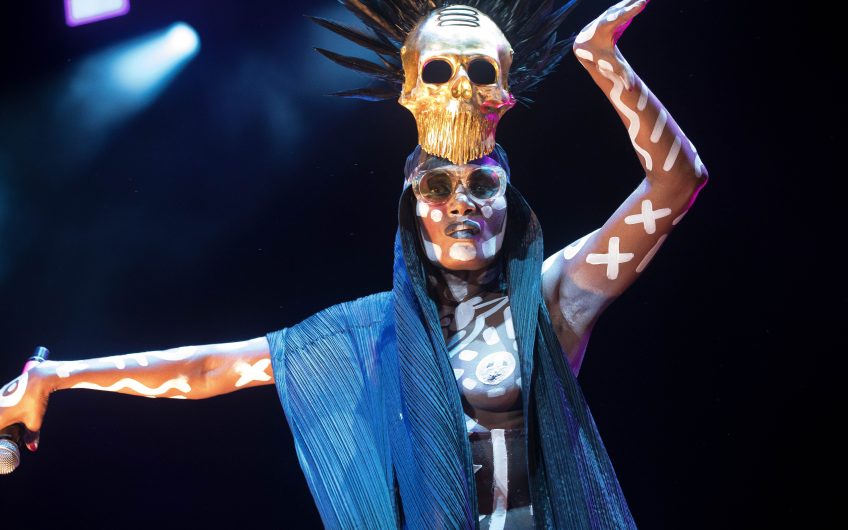 Grace Jones does everything you expect of a pampered star.

Our interview is scheduled for 9pm on Saturday. Then it's put back to 9pm the following Tuesday. Then it's delayed till midnight – she's tired after her show at the Albert Hall. She finally rocks up at the photographic studio in Shepherd's Bush, a converted Victorian school for disturbed children, at 1am.

There's a momentary worry among her team (PR, dresser and management adviser) that the oysters come from Wright Brothers, the Borough Market fishmonger that supplies Bibendum restaurant, not from Bibendum itself, as specified. Still, I leave the interview at 2.55am, shattered but charmed.

Having arranged these night-owl interview conditions, she then sympathises with me, conspiratorially, as if someone else is responsible for the whole farrago. 'Oh, lucky you, you got some sleep earlier, did you, early bird?' she booms, basso profundo, laying flirtatious, camp emphasis on the last two words, like an Amazonian Kenneth Williams. 'I'm so exhausted.'

She looks anything but tired. Her skin – like dark teak, steeped in oil – is unlined. I interview her as she is being made up, and so see her face close up and unobscured, after she has washed away her 'mask', a dusting of white powder she wore for the trip from her Putney home. Her face is a delicate piece of architecture with no sign of subsidence, the cheekbones like bulging ping-pong balls, her skin stretching tautly at a raking, shadowed, inward angle down to her jawline.

At 5ft 10½in, her legs, encased in black leggings, stretch forever from a fairly non-existent bottom. When she makes a point – she makes lots of points – she unbends her right arm into a long, stiff straight line, unfurling her bent fist, slowly and slinkily, into an open, upturned palm.

The bulging muscles, familiar from her incarnations as Zula the Amazon in Conan the Destroyer, and May Day, the butch Bond girl in A View to a Kill, have retreated under a skin that's contracted without sagging. Apart from a slight tum, she is unmarked by the years.

When she takes off her two-tone pirate's bandana, red on one side, black on the other, the familiar short-cropped hair is revealed. 'I did it in my teens. It was very painful combing my hair. My grand-uncle was a Pentecostal bishop and he was very strict: our hair couldn't be permed or straightened. So I just cut it all off.'

With her ungreyed, short hair and that unmarked skin, Jones could pass for 40. 'I don't have a regime,' she says, manoeuvring lemon-drizzled sashimi with chopsticks through the rounded Cupid's bow of her mouth. 'This is the food I love to eat. And I do a little exercise, but I don't do excessive body-building like when I trained twice a day for a year with Arnold Schwarzenegger and Dolph Lundgren.'

She drops these names without a clang. Her charm comes from being completely straight – neither arrogant, nor self-deprecating – about a life that has jumped, Zelig-like, through the fleshpots, recording studios and ateliers of New York, Paris and London.

Beginning in America as an actress – 'I am an actress first, a singer second' – she moved to Paris, where her modelling and recording career took off. By 1977, she had signed with Chris Blackwell's Island Records, where she recorded her greatest hits, including 'Slave to the Rhythm', 'Pull up to the Bumper', 'My Jamaican Guy' and 'La Vie en Rose'.

Her nights then were straight out of the last days of international disco: 'running round with Jerry Hall in Paris during our wild modelling days'; dancing till dawn in Studio 54 and becoming great friends with Andy Warhol. 'He was very shy. He was more of a listener but he loved talking with me. He didn't like being surrounded. I was the first person to get him on to the dancefloor. Even after he was shot, he didn't want anyone to surround him. He just made sure he sat with his back to the wall. He gave great advice. I hated signing autographs and he said, "They're going to be really hurt. The energy of signing them is going to be a lot more positive." I always do it now.'

Her accent is a low mix of these different staging posts of her career: an American base, with patois twangs, touches of French intonation and a mixture of Cockney glottal stops and dowager duchess's clipped vowels. 'Bloody hell,' she says at one moment, like an East End docker.

Jones has just returned from Jamaica, which she calls her 'natural home' (she also has New York residency). Even though she left the island in 1965, at 17, to go to Syracuse, New York, where her father, an Apostolic clergyman, set up a church, it is Jamaica that made her the self-aware, self-critical perfectionist she is today. 'I'm a perfectionist to the point of obsession,' she says.

She is particularly down on her contralto/mezzo-soprano voice – cracked and dry tonight through lack of sleep and 'talking a lot'. 'I didn't think I had a voice at all, and I still think of myself as an interpreter of songs, more than a singer. I thought it was too deep; people thought I was a man. I had a very strong Jamaican accent, too; the accent really messed me up for auditions. It was nothing to do with my colour that meant I didn't get jobs – another black girl always got the part. Still, I was very determined and focused.'

She is still determined and focused, and she can flip that diva switch on and off at will. Occasionally, she shouts out 'Crazy, crazy!' to no one in particular, or 'Mamma mia!', punctuating her chat with exaggerated air-kisses: 'Mwa, mwa, vah,' she says, blowing the kisses around the room. But I never saw her become her cliché, an angry, violent woman, a cliché enshrined by her 1981 appearance on Russell Harty's show, when she slapped him.

'If people think I'm angry, I don't want to burst anybody's bubble,' she says. 'I like sometimes for people to be afraid of me. But it's not really anger; it's discipline. My acting coach hypnotised me and found that I was emulating the male authority figures I had growing up. Particularly my step-grandfather, who was 20 years younger than my grandmother. Now you know where I get it from,' she says, breaking into a deep, dirty laugh, referring to her penchant for younger men. 'That very stern church thing: spare the rod, spoil the child. He was a perfectionist. You can't expect your children to be perfect. He'd beat you with a ruler before you made a mistake; belts with different names. I inherited his discipline, being stern.'

For all her supposed sternness, there's something a little self-mocking about the superdiva disciplinarian act. I'm sure she likes the sashimi and the Château Laroque, but she knows exactly what she's doing, and when to rein in the spoiltness.

While she's talking to me in front of the bulb-encircled make-up mirror, she chats back and forth, listens, breezily fields any questions, however intrusive, and doesn't mind being interrupted – all things the Diva School of Interview Technique thoroughly disapproves of. She even gives me her mobile number, in case I have follow-up questions.

But then she turns her head over her shoulder to address her entourage, drops the voice an octave, raises the volume and goes into Kenneth Williams mode, putting heavy emphasis on particular words and stretching them to outlandish lengths. 'It's much better to do coke in the open; there are so many germs in the toilet,' she booms, an outraged Lady Bracknell. 'In Paris, they have a little bit of coke on the dinner table. Otherwise you go into the toilet and you don't know when you're going to take it again; so you hnnnnnnnhh' she says, making an exaggerated snorting noise, 'take as much as possible in one go.'

She is now doubled up with throaty laughter, leaving her make-up artist holding a foundation-rich cotton-wool pad dangling in mid-air. This is all crowd-pleasing stuff, just for show. Jones left her snorting days far behind in Studio 54 and the Paris boîtes.

'Rock'n'roll can get quite overwhelming. You can get caught up in the cycle. Record companies would meet you off an aeroplane and slip you a phial of coke. I like to experiment but not for too long. I'm too vain, one of my biggest sins, but it saved me; I can see what excess does. I was lucky not to mess up something permanently in my brain with the acid. And I always had the drugs tested.'

The wild life has calmed down these days and she is content, and in a stable relationship. 'I won't say who I'm seeing now because it can be detrimental sometimes.'

She remains on good terms with her exes, including Jean-Paul Goude, the stylist who helped to develop her distinctive muscular, androgynous look, and the father of Paolo, her son, who lives in Paris. Paolo, who performs in her band, is now a father himself, to Athena. 'I'm a grandmother, so grand,' she says, rolling the 'r' in grand, a supervamp once more.

In 2006, she got engaged to Ivor Guest, aka Viscount Wimborne, an Old Etonian record producer, 20 years her junior. Their split has been amicable. 'We have collaborated and produced together since. He's at the steering wheel, he's in charge of the band; we work very well together and we're planning another album together. We had to free each other, in order for each other to be happy. If you care for someone, you don't stop caring. You can't forget the one feeling that brought you together in the first place.'

The only time she gets irritated by these personal questions is when we get on to Lady Gaga, who wants to perform with Jones. 'It keeps coming. I don't collaborate. You're born alone, you die alone, you get on stage alone. I'm better as a loner. You can collaborate in a film but to collaborate musically is something I don't do very often. I collaborated with Pavarotti because I love him and I could stretch myself and do opera. It's going to add another thing to me. Lady Gaga isn't going to do anything for me; it'll do everything for her. I'm not there to validate anyone; validate yourself.'

She is getting worked up now. Am I entering Russell Harty territory? No – she drops into her booming laugh again, puncturing her irritation with self-mockery.

'Still, it ain't my first time at the rodeo, as Joan Crawford would say.'

It may not be her first time at the rodeo, but she still seems to be enjoying the show in her scrupulously polite, studied, outrageous way.