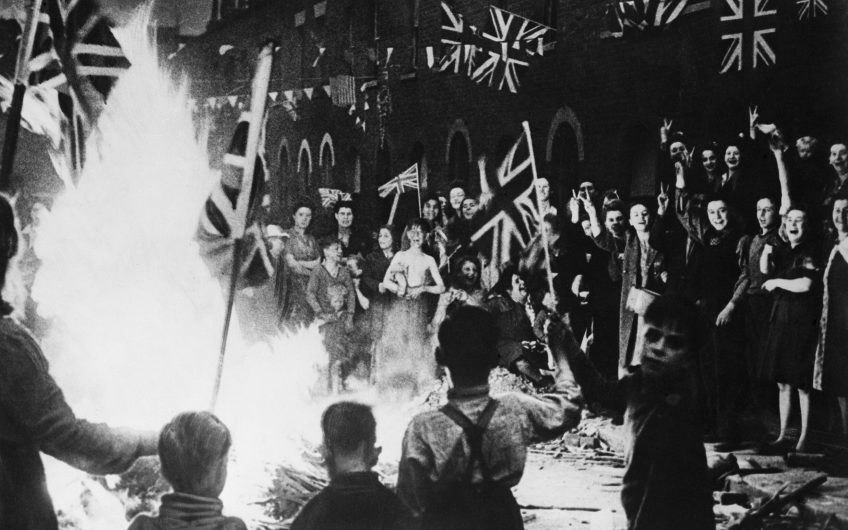 I remember V.E. Day so well.

I was eleven years old and living in the village of Upper Wolvercote, in Oxfordshire. We lived in a little close of five small houses at the end of an unmade gravel road. It ended in a big circle. Nobody then had cars, so this gravel circle was our playground. There were about a dozen local children. I was the oldest boy, so I was leader of the boys’ gang; Marion at fourteen was leader of the girls’ gang. Our parents told Marion and me to prepare a special V.E. day party.

We knew that a party had to mean a bonfire, so we began collecting wood and other rubbish and piled it up in the middle of the gravel circle. Various lorries arrived, unknown to us, and deposited masses of wood on our little bonfire. Soon it was so big we had to get one of the Dads to climb to the top to place the effigy of Hitler on the top of the bonfire which was now over 10 feet tall.

We decided to begin with a Fancy-Dress Competition. My mother dressed me up as an Indian Rajah and, as leader of the boys’ gang, I duly won the competition. Nearly all the girls came dressed as fairies and you could not tell them apart.

On the evening of V.E. Day, the bonfire was lit. Thank goodness it was a big circle of road. The heat was intensive. Some children went back into their houses; but in time we were all able to gather round the giant blaze. Hitler disappeared early to a communal cheer.

Then there were the refreshments. After years of strict rationing nobody had much food. Our family had three allotments and 35 chickens roaming around the entire back garden. My mother would exchange eggs for sugar and margarine. Now she had worked a miracle. There were blancmanges and jellies and cakes and sandwiches; and gallons of orange squash. It was a wonderful feast.

Thirty years on I returned to Upper Wolvercote with my wife. There was still a patch of black on the unmade road where the V.E. Party had been.

Recently I received a letter from Marion, now aged 89. She said that, war or no war, those were the best days of her life. I agree.