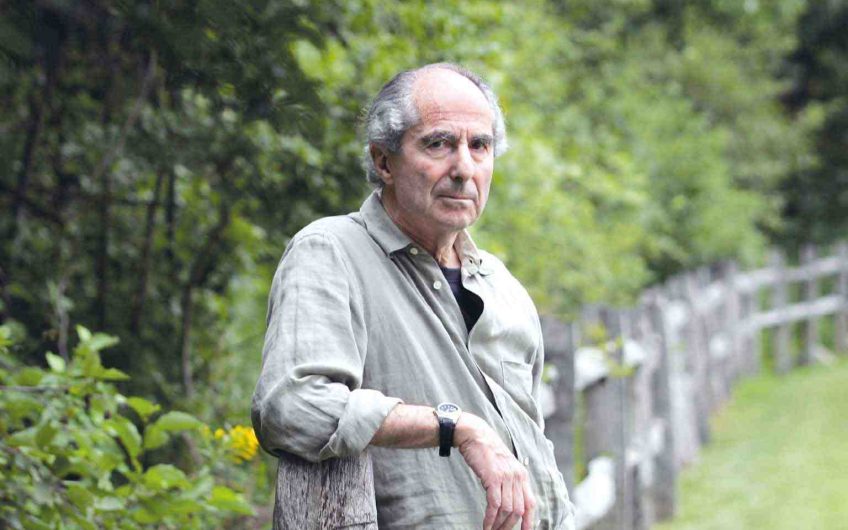 As a new biography appears, director Tristram Powell remembers working with a writer who could be kind – and scarily cruel

I got to know Philip Roth in 1983, when I made a TV film for the BBC based on his novel The Ghost Writer.

I had written to him out of the blue. He wrote back, saying, ‘Come to Connecticut and we can discuss a possible film.’

A couple of months later, the chosen, highly experienced scriptwriter presented his first draft for Philip, now in London, to approve. It was a disaster. ‘This script exemplifies everything my work is opposed to. It contains every known Jewish family cliché,’ Philip said, holding it over the wastepaper basket.

The scriptwriter humbly said he’d like to try another draft. I knew what the result of that would be. We left.

I rang Philip later and told him I’d fired the writer. This small, unhappy drama pleased – even excited – him. His own life was ordered, often solitary.

His clapboard house, bought on the profits of Portnoy’s Complaint (1969), was hidden away up a dirt road, an escape from his unwanted fame in New York. Inside, there were wooden floors, demure curtains and oriental rugs – the deep quiet of a writer’s house, very familiar to me.

At the same time, he loved provocation and disorder as a source of drama. This was Philip 2, the subversive, hilarious voice in Portnoy’s Complaint and Sabbath’s Theatre, who could also be filled with paranoid rage and self-obsession. As he said himself, ‘When God wants to say f**k, he says it through me.’

Philip described how he had escaped from writing well-mannered, ‘good’ books.

‘I was living in New York for the first time. I made new friends. Among the people I met were a group of Jewish fellows, all highly educated, who were very funny – and when we all had dinner together it would get raucously funny. I realised I was one of the funny ones. I could make people laugh, not by cracking jokes but by telling stories.

‘It dawned on me that I could do this stuff in writing. I began to write some stories about a guy in analysis. These stories eventually became Portnoy’s Complaint … nothing in my education had prepared me to be a scandalous writer, but the moment I became comical and freewheeling, I became a scandalous writer.’

He put it more succinctly: ‘I had to squeeze the nice Jewish boy out of me drop by drop.’

We worked on a new script of The Ghost Writer together. I blocked out scene summaries; Philip wrote in fresh dialogue. He went at it with terrific inventive enjoyment.

‘This is BAFTA-winning material,’ he would say. It wasn’t, of course, though it did later win a heavy, iron trophy, which I never saw, at the Banff Television Festival in the Canadian Rockies.

Writing the script, a form of rewriting the novel, was altogether more fun than toiling over his new novel. Later he summarised, in operatic style, 50 years of hard labour at the fiction coalface. ‘Exhilarating and groaning. Inspiration and uncertainty. Abundance and emptiness. Blazing forth and muddling through … and tremendous solitude.’

Philip kept away from the location shoot in Vermont. The only time he visited and was shown the schedule, his reaction was to ask whether the crew’s bowel movements were included.

He continued to avoid signing his contract. This was his way of keeping an element of control over the production. I pleaded with his legendary agent, the then famous Robbie Lantz.

The ancient Mr Lantz was full of steely, irresistible, old-world charm. His list of star clients – from Bette Davis to Elizabeth Taylor, from Carson McCullers to James Baldwin – must have been the most glittering in the world. He was full of sympathy, as we looked out onto Central Park South from his luxurious office: ‘Mr Powell, why do we carry on in this business? Find me another career.’

The film crew was part-BBC and part-American. After an initial froideur, each side slightly in awe of the other, everyone suddenly relaxed. The BBC were not used to – and were rightly impressed by – the American lighting guys’ can-do approach: ‘You want it, you got it.’

We had an unwelcome visit from the slightly sinister Teamsters Union, who represented the truck drivers. Money changed hands.

In the evening, after a drive through heavy snow, which was needed for the story, we were back at the hotel. Much whiskey was drunk. Jack Daniel’s deserved an on-screen credit.

Sam Wanamaker played the distinguished old Jewish writer, perhaps slightly based on Isaac Bashevis Singer, whom the aspiring young writer – as it were an imagined Philip himself – is visiting. Sam was on his phone a lot of the time, in pursuit of funding for his dream project – a rebuilt Globe Theatre on the original Thames-side site.

Claire Bloom, living with Philip at the time, played his wife. As always, she gave an excellent performance but she seemed unhappy at having landed up in this cultural backwater. Costume and make-up bore the brunt of her disdain. Typically, I was unaware of it.

I finished editing the film and we had a viewing for Philip. It seemed to go well. At any rate, he laughed a lot at the end credits. I’d put the Lower East Side gravel-voiced Jimmy ‘Schnozzle’ Durante singing (I’ll Never Forget) The Day I Read a Book on the soundtrack.

Time passed. He then screened the film for Claire and her brother, the experienced feature-film editor John Bloom. I’m not sure how they reacted. But I soon got a letter from Philip 2, bad Philip, telling me how wrong the casting of the lead man was: too anxious to please … no fire in his belly … why had I not followed his advice?

He seemed to have forgotten that he had been involved in every stage of the production, including the casting and meeting the actor in question. And approving him. Whatever was wrong with the film, I must understand it was clearly not his fault. We broke off contact.

More time passed – years, in fact. I wrote, saying that I now, with more experience, felt I could have handled the casting better. He wrote back, telling me he had shown the film to a friend and ‘It’s better than you think.’ Whatever that meant. Perhaps it compared well with the feature films adapted from his novels, all of which he hated.

‘There’s nothing too private for Philip not to use in his work. He’s ruthless,’ Claire said to me one evening.

Philip would have agreed: ‘I am a thief and a thief is not to be trusted. There are no easy answers; there’s great pain – but disclosure is what it is all about. It’s why we live. Disclose it; tell it.’

It was a lesson that Claire took to heart in her memoir of their life together and how it ended, Leaving a Doll’s House (1996). A lot of disclosure and a lot of pain.

In spite of two serious breakdowns, major heart problems and chronic back pain – he had to write standing up – Philip completed three great novels, American Pastoral, I Married a Communist and The Plot Against America. These historical reimaginings were an escape from the novels of ‘personal disclosure’.

His last short novel, Nemesis (2010), set in Newark during the polio outbreak of summer 1944, is particularly resonant for these times.

He had worked ceaselessly. He died in 2018, aged 85, finally asking for medication to be withdrawn, sending away his closest friends with a farewell ‘I have work to do.’