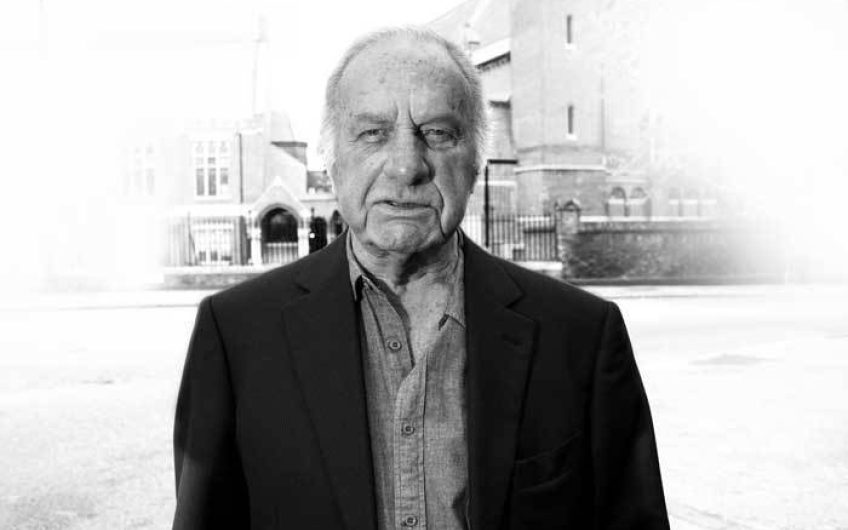 The late Geoffrey Palmer, 93, amused us for more than six decades, on TV, film and stage. Valerie Grove took him to lunch in Highgate

Geoffrey Palmer is so instantly recognisable, so familiar, that I want to fling my arms around him on sight. He is waiting for me outside Highgate Tube station – he was at the station’s opening, he tells me, in 1941— in a jacket and smart jeans, carrying the Times and a stick, though the stick proves purely decorative. ‘Too geriatric,’ he says, ‘even if it is for The Oldie.’

He turns 92 today. When people stop him on the Tube and say they admire him, he tells them they must have a long memory. But he has been amusing us for more than six decades, and we shall carry on watching him on box sets for ever. As Time Goes By (67 episodes, 1992–2005) is my favourite.

Judi Dench once told me she could never have done that sitcom without Geoffrey. He tells me he couldn’t have done it without her. The story of their late-flowering love was entirely believable: in their quick glances of mutual affection, and the way they laughed at one other’s jokes. (To see how much they laughed during recordings, click on the out-takes on YouTube. Judi corpses and fluffs her lines; Geoffrey affects exasperation at one point, asking, ‘Is Eileen Atkins free? Maggie Smith, perhaps?’)

He attributes the series’ success to its writer, Bob Larbey, just as he praises the late David Nobbs, creator of Reginald Perrin, in which Palmer played Leonard Rossiter’s Right-wing brother-in-law Jimmy. Palmer and Dench were reunited again in a Bond film: Tomorrow Never Dies (1997), where he played Admiral Roebuck, M’s naval adviser.

I took him to lunch at Ostuni, a cool, spacious, gastronomically sophisticated Puglian restaurant opposite the gates of his old school, Highgate. This seemed appropriate because Geoffrey Palmer has so often personified the stoical, old-school-tie, officer-class type. In wartime, he and his elder brother were evacuated with the school to Westward Ho! in Devon, but wrote heartbreaking letters to their parents and came home. In the classical sixth in 1945, he was already in officer’s uniform in the school production of R C Sherriff’s Journey’s End, playing Captain Stanhope. Christopher Morahan, the distinguished director who died last month, played Raleigh, and died in his arms (Morahan later directed Palmer in the John Cleese film Clockwise.)

As an Old Cholmeleian, while being photographed opposite the school chapel (see our front cover), Palmer sings us the school song about founder Sir Roger Cholmeley, Lord Chief Justice, riding up Highgate Hill ‘sedate and slow’ in 1565.

It was after service in the Royal Marines that Palmer made his escape from a humdrum accountants’ office off Piccadilly. A girlfriend who did am-dram suggested he join her in the Woodside Park Players: a suburban epiphany. It led him to local rep – the Q Theatre at Kew, the Grand Theatre, Croydon – where he learned his craft, a training lost to modern young actors. ‘We were so lucky, learning slowly, over many years, what to do on stage, how to control an audience.’

His deadpan expression and invincibly middle-class demeanour ensured him endless roles in that caste: Major this, Mr Justice that, Professor X, Doctor Y, and innumerable Chief Supts. In Fifties and Sixties sitcoms, such as Bootsie and Snudge and the Army Game, he already displayed his genius for comic timing.

In 1963, the year of the first Dr Who, he married Sally Green (not a fellow thesp; she was a health visitor) and they are still together – ‘the greatest luck’ – after 56 years, though lamenting the dwindling of friendships. ‘All my school friends are dead. At our wedding in 1963, there were six ushers: they are all gone.’

He and Sally now live in Old Berkhamsted, Hertfordshire, in a house whose location sounds like every oldie’s ideal: ‘A hundred yards from the high street, six minutes’ walk from the station, doctor’s surgery diagonally across the road, Waitrose no distance.’

I wonder if readers realise that it was Geoffrey Palmer’s voice which said ‘Vorsprung durch technik’ in the Audi commercial 33 years ago? ‘The brilliant’ John Hegarty of Bartle Bogle Hegarty re-cut the ad to fit Palmer’s voice.

‘You are the voice of Audi,’ the client company told him, and offered him a car.

His brother, who knew about such things, told him to ask for an Audi 100. Palmer sold his Saab, and waited. Then they rang and said, ‘Oh dear, your Audi 100 has fallen off the jetty at Harwich – would you mind an Audi 200 instead?’ ‘And they replaced it every year. Those were the golden days.’

Highgate in his youth had no fancy restaurants (‘It was wartime, there was rationing, for God’s sake’). Until the Tube came, he travelled there by steam train, ‘as in the Railway Children’. In The Grove, the village’s poshest address, lived famous actors and writers: Dame Gladys Cooper, Raymond Massey, J B Priestley. More recently, residents come from the worlds of pop and fashion: Sting, Kate Moss and – as we see from a greensward decked in flowers, teddies and billets-doux saying ‘We love you, George’ – a shrine to the lately deceased resident George Michael.

As we walk past this rather sickly display, Palmer is reciting to me a much-anthologised Edward Thomas poem of 1915: ‘As the team’s head brass...’, and giving me a scholarly exegesis of the landscape and period it evokes. It is easy at such moments to slip into Grumpy Old Men mode – a programme for which he was an obvious choice to do the voiceover. Though, in fact, as he has said: ‘I am not grumpy. I just look this way.’

He says he is too deaf to go to the theatre any more. That day’s Times carried a review of a newly revived play, ruined by its inexperienced cast of young TV stars – just as Palmer predicted.

‘And that’s another thing: who can one trust to tell the truth about a production? Wonderful Mr Bailey of The Oldie,’ he tells me, ‘is the one I turn to. He cuts through the crap.’ Unlike another national paper critic, who ‘should not be allowed out at night. I keep planning to write a letter from Angry of Berkhamsted’.

When our photographer, Dafydd Jones, arrived, Palmer praised his picture of racegoers at Cheltenham in the May Oldie. He told us he had been to Cheltenham last year, the first race meeting in his life because he owns ‘the fetlock’ of a five-year-old racehorse called West End Story, who won his first race by six lengths.

Over our pasta and Primitivo, I mention his pub quiz accolade: he is the only actor who was in each of the top three of the 100 best British TV programmes ever (in the BFI list). In Cathy Come Home, he was a property developer (‘Oh yes – half-a-day’s work, three lines’); in Fawlty Towers, he was the unforgettable hotel guest Dr Price, insisting on his breakfast sausages while Basil tries to conceal a corpse; and in Dr Who, he can’t remember whom he played. ‘I know I’ve died three times in separate Dr Who series. Once I died coming through the barrier at Marylebone Station. Once I collapsed in the phonebox. Most recently, in David Tennant’s Christmas edition.’

He has resisted all blandishments to write a book. ‘Oh, come on,’ he says. ‘ “Sitcom actor writes memoirs.” Deeply boring.’ But his career spans a momentous era. Having seen Gielgud’s Hamlet as a schoolboy, he was directed by him in Private Lives, and visited him at his home (now Tony Blair’s) when he was fading. ‘Goodbye, dear boy,’ whispered Sir John, ‘we must work together again soon.’

As a young man, he shared a Chelsea flat with the playwright Peter Nichols, ‘in the only slum in Carlyle Square, one door from Sir Osbert Sitwell’. In 1977, he played Warwick to Eileen Atkins’s wonderful St Joan. ‘I remember the Evening Standard headline: “Greatness returns to the Old Vic”.’ Olivier directed him in Priestley’s Eden End, playing a ‘crashing bore’ named Geoffrey, which put him off the stage and steered him towards innumerable movie roles: Sir Henry Ponsonby to Judi Dench’s Queen Victoria in Mrs Brown; Stanley Baldwin in WE, directed by Madonna, who addressed him only as ‘Mr Baldwin’; Head Geographer in Paddington Bear.

He could have been Archbishop of Canterbury in The Crown – his agent said the money would be good ‘and I hadn’t heard those words for thirty years’ – but he thought the script not good enough. ‘Well, of course,’ said Eileen Atkins, who happily took on Queen Mary.

It seems entirely in character that, when he was a castaway, his Desert Island book was the Oxford Book of English Verse; his luxury was a fly-fishing rod. He is devoted to the contemplative gentleman’s pastime.

‘Once I was offered a super part in a film – but the date clashed with fishing in Scotland. ‘My son Charlie said, “Dad, you’ve been working for sixty years – do the fishing.” So I did. And the film wasn’t any good, anyway.’

And that’s where he will be found on his birthday: at a fishing lodge in distant Sutherland, with wife, son and daughter, equipped with rods, flies and waders – a world away from the film and TV screens he has dominated so effortlessly for nearly seventy years.