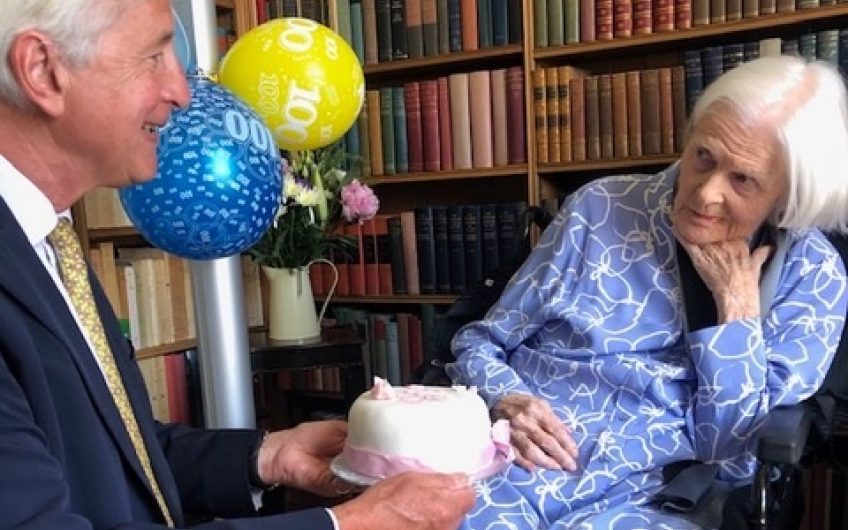 Clarissa Avon, a former Oldie of the Year, celebrated her 100th birthday yesterday. Due to the pandemic, it was not possible to give her the party she so deserved, but her niece, Sally Ashburton, gathered a very small group for a suitably socially-distanced alfresco lunch in her London apartment.

There were flowers from friends and families and balloons adorned with ‘100’ to brighten the occasion. Sally brought a delicious chocolate cake, and I commissioned one from a lady in my village made, appropriately, close to the banks of the River Avon. The Queen’s card arrived – with the same picture we saw on Captain Tom’s earlier in the year.

Clarissa is well cared for. I could not help notice the look of genuine affection and respect in the eyes of her housekeeper, Patricia and her carer, Amina. As we know, it is not always thus with the old.

There is something poignant about a 100th birthday. A sense that it is near the end of the road, a long journey through life, and while there are many articles about how to cope with life after 60, 70 and 80, I don’t know of any for life after 100. If you haven’t achieved it by 100, you are unlikely to do so.

When Clarissa had lunch with old friends such as Cecil Beaton and Anne Fleming (then Rothermere) shortly after marrying Anthony Eden in 1952, she left to return to Carlton Gardens with the phrase: ‘I must be pushing along.’ To which the ever-mischievous Ali Forbes could not resist saying: ‘Haven’t you pushed along far enough, dear?’ In fact, it was probably more of a case of being pushed, than pushing.

Her life has three parts. As a young girl, she was remote, often quiet - ‘I only spoke if I had something to say’ – she studied philosophy with Isaiah Berlin and David Cecil. She must have been something of a Zuleika Dobson amidst the spires of Oxford. She was well-connected as Winston Churchill’s niece, intelligent and well-read, and one of the recognised icons of beauty of the Twentieth Century. Studying in Paris before the war, she was swept up into the world of Marie-Laure de Noailles and Cocteau. She continued her haute Bohemian existence until 1952.

When she married Anthony Eden, her life changed completely. Figures like James Pope-Hennessy and Lord Berners were replaced by international statesmen. Politics was never her world, but she enjoyed assessing the characters of the men of Westminster and the world politicians she now encountered. One day, not now, her resumé of the Profumo affair will make fascinating reading. When I first read her letters to Cecil Beaton (don’t rush to St John’s College, we gave them back to her), I was astonished to find the distinguished figures in office when I was a child, described as ‘buffoons’ or ‘old toads’. It was most refreshing. Over the years I have come to relish what I think of as her ‘positive negativity.’ She once expressed the wish to leave a dinner in Patmos in 1983: ‘I think we have exhausted the social possibilities of this evening, don’t you?’

When Anthony Eden left Downing Street in 1957, she cared for him for twenty years. Only after he died, did she take up the reins of her former life, introducing new figures into it. Had a bomb dropped on her 90th birthday party, it would have wiped out some of the most interesting people in Britain. Besides the obvious ones – Churchills, Tennants and Cecils, it would have caught Lucian Freud, Barry Humphries, Colin Thubron, Robert Harris and John Stefanides, all of whom she found in later life.

Now, inevitably she is a bit piano, but she is decisive and can still give a pointed response to a question. When I took a young Harvard-educated author to see her last year – who was writing about the Yalta Conference through the prism of three girls who had accompanied their fathers – a Churchill, a Roosevelt, and a Harriman – she asked Clarissa eagerly: ‘You must have known Averill Harriman?’

Clarissa leant back – she was in bed at the time – and said: ‘I always thought he was the most frightful bore.’ One of the heroes of the book bit the dust.

She was rightly celebrated as an Oldie of the Year, and I venture to suggest that she was making an impact even before the great Dame Vera Lynn.