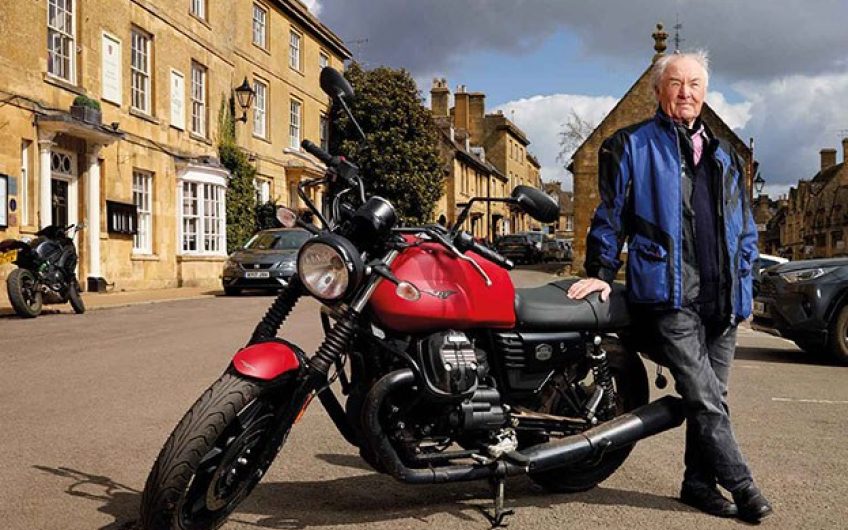 On the centenary of Moto Guzzi motorbikes, Peter McKay roared around the Cotswolds for a rural taste of la dolce vita

Even the Beckhams, Victoria and David, feel the need to live part-time in an old barn near the club for wannabe Cotswoldians, Soho Farmhouse, on

I see a pigeon flying alongside trying to keep pace, and feel the early-morning sun kiss my face.

What better way to make you smile, than driving through the Cotswolds mile after mile?

Bravo! But motorcycling through the Cotswolds is a more intense experience, I’d say. Especially on my Moto Guzzi VIII Stone. Like the Cotswolds, it oozes character and class.

Spring, summer and autumn, bikers are drawn to the Cotswolds. We love leaning our machines and bodies into bends. It’s almost the whole point of biking. Flying but still on the ground. It’s why our foot pegs are hinged to flip up safely when striking tarmac while the biker is leaning too far into a corner.

We also love undulating landscapes. Merge them with bends and we’re happy. Can there be a more curvaceous series of bends than those on Fish Hill, where the westbound dual carriageway of the A44 descends steeply towards ‘Jewel of the Cotswolds’ Broadway, Worcestershire? This tempts bikers to touch their ears on the ground, let alone their foot pegs.

Broadway, a honey-stoned place of picture-postcard beauty, could have been specially constructed for a film about a perfect English township. (Except for the SIX Porsches parked outside the Lygon Arms Hotel there on the day I rode in.)

‘You’ll be booking your next Cotswolds holiday as soon as you return home,’ claimed a website I consulted.

Actually I’d planned a trip to Italy’s Mandello del Lario, on Lake Como, to visit the HQ of Moto Guzzi motorbikes, where they are celebrating their centenary this year. This had to be cancelled, of course.

So was an alternative plan to ride North Coast 500, a challenging, circular Inverness-to-Inverness route devised by wily Caledonian tourist bigwigs to promote the wild, northern fringes of Scotland. But why annoy scary First Minister Nicola Sturgeon by visiting

Caledonia before she invites us to do so? Living as I do in the north-east fringes of the Cotswolds, an area I’d never explored as a tourist, why not give my proud Italian steed a run closer to home?

In spring, summer and autumn, bikers convoy through. They park in the most scenic hamlets, posing in their leathers while smoking, drinking coffee and showing off their shiny steeds to not- always-impressed locals.

Six of them loitered outside the gates to Blenheim Palace in Woodstock when I passed the other day. The UNESCO World Heritage Site provided a disconcertingly dignified background for the Mad Max-like gang and their dangerous-looking machines.

Woodstock is as good a place as any to begin a Cotswolds tour but photographer Neil Spence and I met up in Chipping Norton, itself a destination for the two-wheel gentry. Through its centre rode a white-bearded, elderly gent on his black BMW, followed by an antisocial hooligan revving his designed-to-be- noisy, knobbly-tired off-road machine.

The supposed home of the oft- mentioned Chipping Norton set, which is said to include media/political grandees David Cameron and Times boss Rebekah Brooks, it’s a long-running joke in journalism. But I have often been asked whatit’sallabout–andifIama member. I reply, ‘Not yet, but I’m on the waiting list.’

The ‘set’ I believe is the sardonic invention of The Oldie’s media commentator, Stephen Glover, a citizen of nearby Oxford, where the existence of such an elite-sounding body in bucolic Chipping Norton is a source of both envy and disparagement.

Jeremy Clarkson earns huge fees from TV, but squanders them hobby farming locally. Local business folk appreciate his efforts on their behalf publicising the area. In 2005, he drove a Rolls-Royce Silver Shadow into Chippy’s swimming pool, watched by consenting council bigwigs, purportedly as a salute to The Who’s late rascally drummer, Keith Moon, but in reality a gesture to publicise his local residency.

Cotswold towns of note on my tour included Burford, its steep main street crammed with interesting shops, and nearby Bibury – for some reason, a place of pilgrimage for Chinese visitors. A household name living here moved house after a couple visiting from Birmingham watched through her parlour window as she ate breakfast.

Gracious Chipping Campden is worth a visit, as is busy Stow-on-the-Wold, Bourton-on-the-Hill and Bourton-on- the-Water. Cirencester should not be avoided; neither should Painswick, or the Slaughters, Lower and Upper. Do not bypass lovely Castle Combe.

For those in need of sustenance, the Cotswolds is rich in gastropubs. Personal favourites are the Boxing Hare at Swerford, the Fox at Oddington, the Paxford at Churchill, the Swan at Swinbrook, The Crown at Enstone and the Horse and Groom at Bourton-on-the-Hill.

Although the area is fascinating to most visiting adults – particularly the Chinese, who also throng to nearby Bicester Village shopping malls – there’s plenty to interest children, and grandchildren.

My own were very impressed by the exotic beasts wandering around outdoors in the Cotswold Wildlife Park near Burford – especially the male lion who, as if by special request, roared in their direction.

The Cotswolds is the kind of place you can take foreign visitors if you want them to form a favourable impression of modern Britain – a place that has most modern conveniences but hasn’t allowed the best of the past to be obliterated.

For some visitors from city hellholes, it must seem like a modern-day Brigadoon – the enchanted Scottish village that in the 1954 Hollywood musical rose from the mist every

100 years. Any outsider who wanted to remain there had to accept the loss of everything he or she knew in the outside world. It’s possible that members of Soho Farmhouse at Great Tew hope to enjoy the Brigadoon effect of being close to the Cotswolds without renouncing their rat-race London lives.

After my Moto Guzzi mini-tour, I joined a friend at a bar called Bitter & Twisted in Chipping Norton’s square. We checked in (as you do) via the NHS app and shared a hot chilli pizza and beer served to our pavement table by a skinny, cheery young waitress with a Claudia Winkleman fringe.