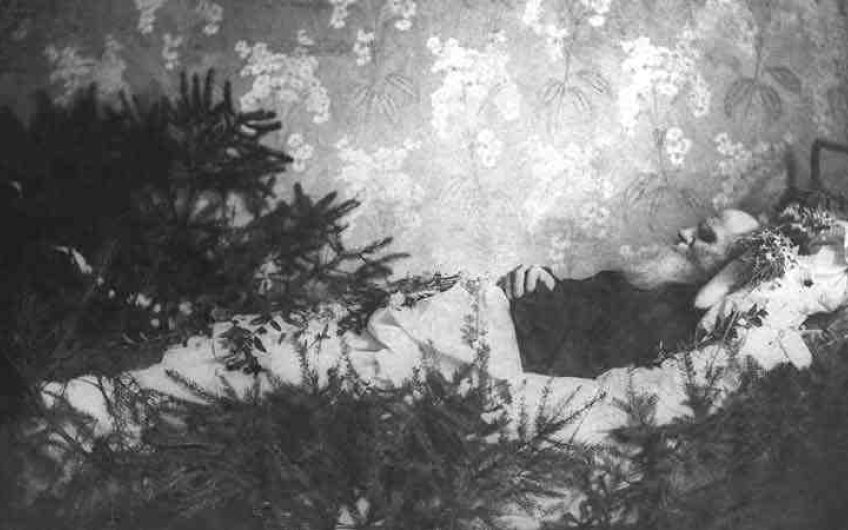 At 82, the great writer left his wife. He wanted to get hundreds of miles away but only made it to a nearby station. By Sara Wheeler

A hundred and ten years ago, on 20th November 1910, the second-most-famous man in Russia after the Tsar died on a modest cot at Astapovo railway station, 200 miles south of Moscow.

Tolstoy had often written about the moment of death. He must have known it was his turn.

Shortly before, an elderly countess had stepped from a carriage onto the lonely platform leading to the stationmaster’s house. Accompanied by a man and woman, she wore a dark coat with a fur trim, and a black hat.

The dawning sky was aspirin-white, but there was no snow. Puffs of smoke rose above the railway engine. The three walked slowly towards the station house. The countess drew on gloves. As they approached the building, a slim, bearded figure inside slammed the door shut.

I can report these details, as I have watched flickering footage of Countess Tolstoy’s arrival at her husband’s deathbed on YouTube.

Sofia Andreyevna had been married to Tolstoy for 48 years and had given birth to 13 of his children. At four in the morning, a few days before his death, Tolstoy, carrying a candle, entered his live-in doctor’s bedroom on the first floor of his ancestral home and woke the doctor. He told the man softly they had to leave. Tolstoy said, ‘Don’t wake Sofia.’

He was 82 and wished to renounce the world. His wife was of the world. Tolstoy left Sofia a note saying that he could no longer bear ‘the state of luxury in which I have been living’. He wrote, ‘My leaving will grieve you. I’m sorry about that, but please understand and believe me: I cannot do otherwise. My position in the house is becoming – has become – impossible.’

The two men – the writer and the doctor – rode to the nearest station in a carriage, swaddled against the cold as winter was shouldering in from the north. They bought third-class tickets to Kozelsk and headed to the Optina Pustyn monastery, and then on to visit Tolstoy’s sister in her convent. After that, they set off for the Caucasus, hundreds of miles to the south. But Tolstoy fell ill and was obliged to get off the train at Astapovo (a station now called Lev Tolstoy). They put him to bed in the stationmaster’s house.

On reading his note, the countess threw herself into a pond, but it was too shallow to drown in. After changing her clothes, she chartered a train to Astapovo. But when she got there, her husband’s acolytes wouldn’t let her in until Tolstoy had lost consciousness. It was one of these acolytes who had slammed the door when he saw her. The YouTube footage shows Sofia Andreyevna pressing her face against the window.

Tolstoy’s followers had been saying for years that Sofia was hysterical. Who wouldn’t have been? Tolstoy was one of the most egotistical men ever to have lived which is why he was able to give us those masterpieces War and Peace and Anna Karenina. Like many great men, he loved humanity but didn’t care much for its individuals.

The Master died at 6.05 in the morning. It was oddly fitting that his death should have occurred in a station: his fiction associates the railway with death, not progress. Anna Karenina perishes under a train, red handbag flailing, and throughout the novel the railway represents the ugly threats of modernity, adultery and nightmares.

Did Tolstoy believe he was about to meet his maker as he lay in the starlight? He had in his life gone through various spiritual crises and conversions, turning to and away from Orthodoxy, confecting his own brand of religious thinking. His faith was always of the mystical variety and for a long time he identified as a yurodivy, Russia’s special brand of holy fool.

Around the time Nicholas II came to the throne in 1894, Tolstoy began supporting persecuted sectarian groups.

He had also criticised the Orthodox church for its unwillingness to stand up to the abuses of a cruel and dictatorial regime. (One wonders what he would have made of Patriarch Kirill’s supine role today.) In 1901, the church excommunicated Tolstoy.

News of the count’s illness had reached the press, and soon hundreds had converged on the Astapovo platform – 60 army officers among them.

A Pathé man, reporters and stills photographers crowded round the stationmaster’s small house along with hordes of villagers. Students across the land demonstrated, expressing their sorrow that such an influential critic of the government had fallen silent.

The body was taken back to the Tolstoy home, Yasnaya Polyana, in the Tula region 125 miles south of Moscow.

Thousands followed the cortège and sang hymns, and others knelt in the weak sunshine when the bier passed. A dwelling called Yasnaya Polyana (Bright Glade) had been on the site from at least the 17th century. At that time, the property was on the southern border of the Moscow principality. Tolstoy’s grandfather Prince Nikolai Volkonsky had inherited the land and its dwellings.

He was the prototype for Prince Andrei Bolkonsky in War and Peace, and Bald Hills, the Bolkonsky estate, bears many similarities to Yasnaya Polyana.

Tolstoy had loved it there. In his diaries, he describes candlelight glinting off the icons in a corner of his grandmother’s bedroom, and a serf orchestra playing pieces by Haydn as he, a small boy, walked down the alley of beech trees leading to the main house.

He had inherited the estate when he was 19 after his father went to the bad (details are hazy but sex and drink were involved). Besides the land, Tolstoy gained the title ‘count’ but, in the sclerotic Russian hierarchy, he was not considered a proper noble.

Notwithstanding his effusive affection for his beloved childhood home, he had lost the main house at a card game, shtoss, with fellow officers while fighting in the Russo-Turkish war in the Caucasus (‘I’m so disgusted with myself that I’d like to forget my existence’). It was typical of his contradictory nature.

After he had gambled it away, serfs took the house down brick by brick and rebuilt it on a neighbouring estate. From then on, the family lived in wings that had been added to the original manor. A single stone remains of the main house, engraved with words saying that Tolstoy was born at that place.

They buried him under an unmarked grassy mound. When I visited his grave, an oriole was pulling at a worm on the mound. The bird and I were alone among shafts of midsummer light filtering through a stand of ashes. Beyond clumps of bluebells, yolky lilies patterned the surface of the shallow pond into which Sofia Andreyevna had hurled herself.

A small sign at the edge of the grave declared, in Russian, ‘Silent Zone’. The chirruping oriole had not read the sign.