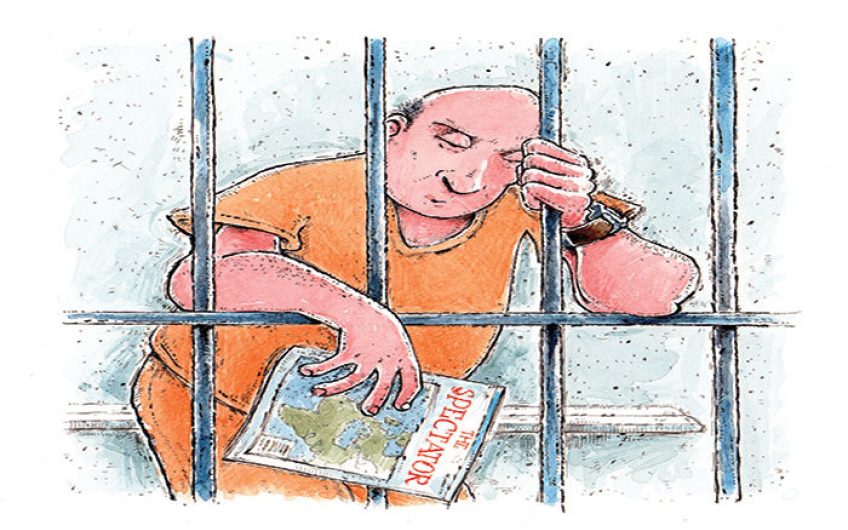 The big house, the joint, the pen… a prison by any other name. This is life in the North Carolina correctional system. Put an end to my wife’s life in a fit of blind, jealous rage, and thirteen years on, I still haven’t come to terms with it. I was 48 and she was 33 – she fell for a better-looking chap with a young body and old money. Familiar story. My sentence was life.

‘Hard time’ applies only the first year or so; from then on you’re just ‘cruisin’, i.e. getting comfortable within the system. After that, prison life can even become curiously seductive – no responsibilities, free everything, in a city writ small. We have a grocery, a library, a barber shop, a diner, a medical clinic and a gym.

Societal practices are different, however. You become territorial.

Privacy is prized and jealously guarded. Eye contact is kept to a minimum, except around friends. A stare can be misinterpreted, generating trouble. Inquiry into another’s crime is an absolute no-no. Don’t ask, don’t tell. Nonetheless, certain indicators are constant: the flabby physique and reclusiveness of the deviant, and the furtiveness of the sneak-thief.

Embezzlers and drug manufacturers are the most entertaining and articulate. The rest are for the most part liars, fools, blowhards, power-freaks and manipulators, and tend to be worse gossips than any fishwife. Verbal backstabbing seems to act as an effective safety-valve.

Bank robbers and white-collar offenders occupy the upper strata of inmate hierarchy, while at the bottom are paedophiles – ‘short-eyes’ – who sometimes get a hard time of it, but not as much as you might imagine. Most are simply shunned or vilified beyond earshot. The general attitude seems to be that at least they’re not messing with kids while they’re locked up.

Blacks, many of whom assign themselves bizarre names like ‘scientific’ or ‘justified’ or ‘civilised’, constitute the majority at all prisons in North Carolina. They are inclined to be exuberant, a trait that doesn’t sit well with most whites, and which can lead to tense situations. It’s fair to say that there’s not much love lost between the two groups.

Cherokees tend to be rather solemn and are well represented at this facility, as are Mexicans and Asian-Americans. The latter are generally passive and prefer their own company. But of the various ethnic factions, it is the Lumbees who are the oddest. They are a semi-official amalgam of blacks and native Americans, or Indians, whose personalities lean towards irrationality and violence. Experienced cons avoid them.

Each camp also has its quota of homosexuals. A small minority of gays dress up like Christmas trees, with plucked eyebrows, lipstick (from the red coating on vitamin tablets), eyeliner and mascara (coloured pencils), and hair dyed with bleach. Interestingly, these flamboyant types are quite well respected and admired for their honesty and their outrageous personalities. The most despised are the hypocritical, who tend to be either deeply religious or muscle-bound, many of whom routinely condemn but covertly engage in gay practices. We all know who they are.

There’s a surprising absence of violent behaviour among the population, and an equally remarkable number of acts of genuine kindness and compassion. The two things that are almost guaranteed to land you in trouble are ‘money and mouth’. Thus the best strategy is not to borrow or lend, and to keep your own counsel. Ultimately, giving and receiving respect are the essential ingredients in maintaining social harmony.

Most inmates and staff of this institution, which is located high in the mountains, are drawn from the immediate area. Sadly, the local gene pool is painfully shallow. Generations of inbreeding and insularity have resulted in a specific form of deprivation retardation, evidence of which is reflected in facial appearance and speech patterns. Much of it is unintelligible to outsiders. Local mountain folk are frequently described as ‘nutty as squirrel shit’, which of course does nothing to alleviate their sense of inferiority.

This is not to say that they don’t embody a rustic charm and horse sense. Some of my fondest moments have been spent in the company of characters whose mangling of the English language may include pronouncing the ‘w’ in ‘sword’ or employing eccentric tense endings like ‘throwed’ and ‘growed’.

Other solecisms have resulted in much hilarity, as for example when a chap named ‘Pee-dab’ – our resident malapropist – holds forth. His most memorable gaffes include ‘I hope they make them sentence reductions radioactive’ and ‘that substitute priest we got gave me a brand-new rosemary’.

Staying occupied while incarcerated is vital. It helps to compress the great enemy of time. Days may be spent in vocational or academic programmes, or as a teacher’s aide. Evenings are mostly given over to reading, study, letter-writing, TV-viewing, or board and card games. For this particular old Brit, the tedium is also alleviated by the Spectator and Private Eye which arrive regularly, courtesy of the London-based Prisoners Abroad, whose unswerving support has been generous and very much appreciated.

It is said that people emerge from a long prison sentence with either a bitter or a better mindset. Mine will be better, if for no other reason than I have learned the value of comradeship. Which is why, as another day draws to a close, I shall not mind at all spending time relaxing with friends at the games table. Perhaps Pee-dab will be there to play Monotony with us.